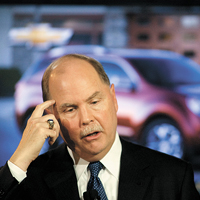 The sacking of Fritz Henderson as General Motor's (GM) CEO underscores the problem of cleaning up a company using old brooms. Henderson, an inbred CEO, has been hesitant in his eight-month stint to let go of old loyalties and loyalists.

Himself a beneficiary of patronage from the previous CEO Rick Wagoner, Henderson was not able to remove the incumbent CFO, Ray Young, though the board disapproved of him. Henderson also could not do a clean job of selling Saturn, Saab, and Opel operations. He did manage one sale, of Hummer to a Chinese company. His dithering ensured that GM's US marketshare dipped by 22 per cent despite the sales rush in Q3 because of the cash-for-clunkers scheme.

Henderson may be the last ‘insider' CEO at GM. The Obama administration is in a rush to tidy up GM and it is looking to get a new broom from outside the GM's tainted lot. The turnaround achieved by Ford under the ex-Boeing CEO Allan Mullay in the past three years saved the company from bankruptcy and made it more relevant to the present with its lineup of smaller, more fuel-efficient cars. What weighs in favour of an outsider CEO is the fact that the chairman and acting CEO, Ed Whitcare, himself is a telecom man from AT&T.