Inside The Digital Township 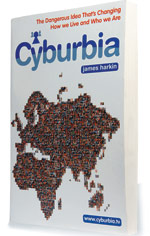 Cyburbia is the new ‘suburbia', enabled by the development of information communication technology (ICT), and that's where people are migrating to in hordes. It is a virtual world that seems to be real in terms of what it offers and how it affects large segments of the human population. But all this did not come from nowhere and was not built up in one day. Cyburbia puts this society-technology mash-up into perspective by chalking out the past 70 years of its making and how we arrived where we are today.

Cyburbia, says Harkin, has been built upon three fundamental pillars. The first one is ‘cybernetics', a concept propounded by Norbert Wiener. Taking cues from military warfare where men and machines need to be in a continuous information loop, Wiener saw messages as the key defining factor in the evolution of the human race. These messages, when pulled into a continuous information loop, will enable the society to correct its own errors, adjust to changes and, hence, evolve.

The second pillar is that of a social phenomenon in the late 1960s, an era synonymous with radical politics, riots, barricades and youthful self-expression against authority. There was a clear rejection of bureaucratic hierarchy and authority, a so-called hippie culture built on ‘authentic peer-to-peer communication'. Known as the New Left, they had equal disdain for the military-industrialised bureaucracies of the West and the communist governments of the Soviet bloc. Prominently based out of California, this movement had a deep impact on the new media of that period and many of the activists were later seen spending time with building and running computers.

The third pillar is the network theory, which covers the connections of people, ideas, machines and laws that govern the network. This world seems to be a small place when viewed from a network perspective, where each person can be linked to any other through a mere six degrees of separation. And the power of a network depends on the number of connections between these nodes, the number of relationships and their intensity. And ‘who you know' becomes at least as important as ‘what you did'.

Since the 1940s, Wiener's cybernetics idea about the centrality of messages has travelled far, from the military-industrial establishment to the counter culture, and from there into the business world and the rest of the society.

But has all been achieved as envisaged in the idea of cybernetics, peer connections and network as a ‘bigger mind'? Probably not, as the latter half of the book reveals. What was conceived over the decades as ‘a global giant network' has resulted into something else. And therein lies the "dangerous idea that's changing how we live and who we are". Based on a series of research studies conducted in this space, the book explains how the need for ‘authentic peer communications' has been replaced by ‘peer pressure', where the views of those who come early dominates. Be it product rating, or a popular vote; once a ranking sets in, others simply follow. So the most popular book is rated further as the most popular by more respondents. And there exist similar challenges such as malicious intent and information overload not allowing people to do much beyond just being part of the information loop.

Cyburbia covers the entire paradigm of how different aspects of technology, social and political movement and networking have evolved over the past 70 years to build what we see today. The book completes the loop by covering extensively how some of those initial tenets and goals have not been achieved.

Where the book probably loses out is that its entire background has the western world in mind, with no connection to the fast-developing nations such as China and India. The social context in which the development of Cyburbia is embedded can only be partially related to our world. There is much more that could probably be analysed when seen from the eyes of Chinese and Indian netizens.

Overall, an interesting book, which should appeal to anyone who has been wondering where the ‘big mind' came from and what to know before doing something with it.