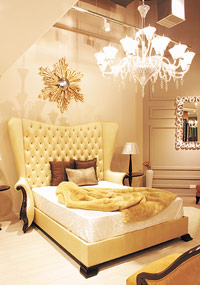 08 November, 2014
Print this article Font size -16+
Three years ago, when Supertech Group, an NCR-based realtor, was nearing its 25th anniversary, its chairman and managing director R.K. Arora asked his team: “What next?” Six months later, after an exhaustive internal survey of the luxury segment, they concluded that consumers wanted a “complete” branded lifestyle.

A little over a year later, Supertech tied up with Armani, the iconic Italian luxury label, to offer branded luxury homes. Sporting a by-invitation-only tag, the 100 branded luxury homes (ranging from 3,000 sq. ft to 5,000 sq. ft) “for buyers with not just money but also class and taste” will be fully furnished apartments with interiors, fittings, furnishings and styling done completely by Armani. “The luxury buyer doesn’t want to just wear international brands, now he even wants to live in them,” says Arora.

Last year, the Lodha Group, too, tied up with Armani for its ambitious World Tower — which it claims will be the tallest residential tower in the world. Soon, “after customer response”, it forged partnerships with other brands, including designer Philippe Starck, Pei Cobb Freed & Partners, Jade Jagger, Ken Smith and Six Senses Resorts & Spa.

Experts predict that the next two years will see several branded luxury homes coming up in metros and major Indian cities. Hand-stitched leather sofas in bold colours with the iconic Lamborghini logo, Christopher Guy’s neoclassic work in mahogany and vineer, Phillipe Starck’s custom-designed metal sculptures doubling as chairs and handpicked pieces of furniture, wall-art and flooring inspired by textile art, Aston Martin’s young, sleek designs across a range of products, IPE Cavalli’s home solutions through its iconic furniture label Visionaire, Swarovski-encrusted residences, and many other brands behind such products are collaborating with brick and mortar developers to “curate” and outfit apartments, villas and penthouses in India.
According to consulting firm KPMG, between 2008 and 2012, around 182 luxury projects comprising 25,570 units across the cities of Delhi-NCR, Mumbai, Bengaluru, Chennai, Hyderabad, Pune and Kolkata were launched with a value of about $30 billion. In 2012 alone, around 5,000 such units were launched, and almost all were absorbed. The luxury housing market — 5-6 per cent of the overall sector — is growing at 25-30 per cent per annum.

According to the World Wealth Report 2013, India clocked the second highest growth of 22.2 per cent in its high networth population, after Hong Kong. Currently, India boasts of 185,000 high networth individuals. For branded luxury homes, this is the target audience.

One For All, All For One
Even within the luxury segment, ‘branded’ homes are still an emerging and niche area. Anuj Puri, managing director of Jones Lang LaSalle, reckons that while developers are priming the mindset of target consumers by creating such a demand, the promise of having professionally designed interiors and exteriors, highly evolved and centralised facilities management, and various extras such as concierge services, valet parking and ultra-modern security measures lends these offerings high appeal.
Strong economic growth in the past decade (the downturn notwithstanding), exposure of well-travelled Indians to global living standards, and the increasing upwardly mobile segment are some of the factors that have led to the increase in demand for luxury homes in India, says R. Karthik, chief marketing officer, Lodha Group. He adds that the global Indian now seeks the same brands and experiences in his home as in his clothes or the car he drives.

The flip side to ‘branded’ homes is that everything is, well, branded. So, from the mother-of-pearl wall finish to the Swarovski-encrusted light fixtures, one luxury home is near identical to another, with little or no room for bespoke indulgence, typically regarded as the mainstay of most luxury brands. “Most branded homes lack flavour and individual taste. So the trick is for developers to ensure customisation — something that most luxury brands can’t offer beyond a point given the global design specifications,” reasons well-known interior designer Viraj Mahajan of The Furniture Library, which specialises in bespoke furniture. “As a designer, it’s important to understand your buyer; whether he likes his feet up while reading, what does he read… that’s how opulent, tastefully done homes are created.” In his view, branded homes are often an extension of seven-star hotel suites.

Shehzad Khan, proprietor of The Gold Leafing Studio, while agreeing that bespoke services are limited in most branded luxury homes, feels many international luxury brands are waking up to blending Indian textures and designs with their international styles. Khan, for instance, is doing the champagne-coloured silver and gold leafing work for Armani Casa at Lodha Group’s World Towers.
break-page-break
Market analysts feel that both developers and luxury brands have to figure out how to meet customisation requirements. Neeraj Bansal, partner at KPMG, says that developers will have to keep a judicious mix of  ‘fully furnished’ and ‘customised’ options. With so many projects that will eventually be rolled out, the litmus test will be in understanding consumers’ tastes and demands.

Why would the luxe consumer, for instance, want to enter through a fairytale gate to reach his home simply because a developer has tied up with Disney? Or, what if the luxury consumer wants the iconic Regis Mathieu rose quartz chandelier while Swarovski, by virtue of its tie-up with the developer, offers its own shimmering piece? Or, what if the consumer wants vintage restored art and carefully collected furniture instead of the modern furniture that Lamborghini offers?

Seetu Kohli, director at Ace Maison, which has tied up with real estate developers to bring a complete range of Christopher Guy, Lamborghini, Fendi Casa, and Aston Martin furniture and design solutions, says that while luxury brands offer tremendous choice, the luxury consumers need to understand that the labels cannot deviate from their original style statement. “The signature style of these brands is what makes them iconic. To deviate from the design philosophy altogether is blasphemous,” she says.

Supertech’s Arora says that for the Armani Casa project, customisation will be extremely limited as the design label clearly spells out the details for various rooms and other areas. “You need to know what the brand stands for. The sensibilities of the brand and the consumer have to co-exist. There’s a reason why you pick up a Louis Vuitton bag. You understand its sensibility. You don’t complain saying it would look better with a gold-plated buckle on the side,” he says.
But Om Choudhry, CEO of Fire Capital, a realty firm that creates luxury villas and penthouses in Whitefield, Bangalore, reasons that too many specifications might put off buyers. So, Fire Capital’s luxury brand Empyrean focuses on offering quality maintenance services and providing landscaped open spaces besides recreational facilities with high-end fitness equipment. Urged by consumer demand, however, by the year-end, it will announce tie-ups with two premium European brands for kitchen, bathroom and wardrobe fittings. For its forthcoming project in Kufri, Himachal Pradesh, it is tying up with a Swiss company to design, manage and maintain a row of exclusive, mega luxury villas.

Beyond Interiors
What is beyond debate is that the consumer is definitely sure of what he wants. No wonder then that branded luxury abodes are extending the promise of opulence to an even greater degree — concierge services, trips to Milan, tie-ups with hospitality chains to maintain interiors, lifetime warranty for wall finishes, and even complimentary tailored Armani suits hanging in the wardrobes.

Sunteck Group, for instance, has a tie-up with the high-end luxury Vertu phones for its exclusive concierge service. “From booking movie tickets to sending customers to exclusive parties in Hollywood, you cannot imagine the value-added services that we provide,” says Kamal Khaitan, chairman and managing director of the company. The Lodha Group sent some of its buyers to Milan to meet the Armani Casa design team. Besides, it has tie-ups with renowned concierge company Quintessentially and Six Senses Resort and Spas for value-added services.

The strategic partnerships between developers and international luxury brands gives credibility to the developer and helps the luxury brand establish a foothold in the market. Typically, the model works on either revenue-sharing or one-time fee model, wherein the developer, to share the brand’s tag, offers the brand a design fee or share in revenues. The real estate developer is assured of visibility. “Additionally, branding helps the property command a premium over non-branded properties,” says Bansal of KPMG. Though Supertech is still finalising the rates for its project with Armani, it is touted to be 75-100 per cent higher than other products in a similar non-branded, luxury category. What’s more, many feel that branded residences even create 20-30 per cent resale value.