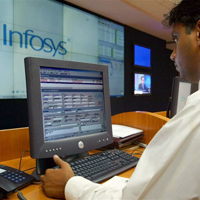 02 December, 2014
Print this article Font size -16+
IT services company Infosys said it had fired the finance chief of its business process outsourcing unit for not complying with the company's code of conduct.

Bangalore-based Infosys, in a stock market filing late on Tuesday (19 November), did not give details about the charges against unit CFO Abraham Mathews. It also said the unit's chief executive, Gautam Thakkar, had resigned on "moral grounds" and would leave the company on November 30.

The business process outsourcing unit contributes 6.5-7 per cent of the overall revenue of Infosys, analysts say.