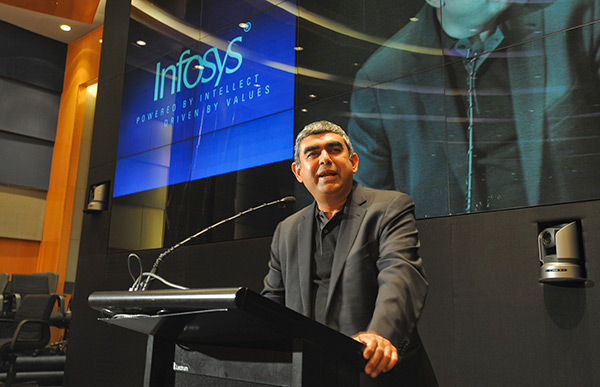 27 April, 2015
Print this article Font size -16+
Infosys Ltd, India's second-largest software services exporter, said it expects revenue in this financial year to rise as much as 12 per cent, after posting fourth-quarter profit that slightly missed analyst estimates.
Infosys also said it agreed to buy Kallidus Inc and an affiliate, which provide digital services such as mobile commerce for retail clients, for $120 million.
Bangalore-based Infosys, once seen as the bellwether of India's about $150 billion IT services industry, has in recent years struggled to innovate and retain market share due to a staff exodus that impacted its ability to win lucrative deals.
Under Chief Executive Vishal Sikka, the company has been making big bets on automation and other new technology like artificial intelligence and cloud-based services to regain some lost ground from rivals.
For the year ending March 2016, Infosys said it expects revenue growth of 10 per cent to 12 per ent. Revenue grew 6.4 per cent in the last fiscal year to 533.19 billion rupees ($8.39 billion).
"We see the industry going through a fundamental and structural transition. Despite being a challenging quarter, I am encouraged by the early successes in executing our Renew-New strategy, on a foundation of learning," Sikka said.
Pricing continues to be under pressure due to increasing commoditization in the traditional outsourcing business, requiring the company to ramp up productivity through automation, Chief Operating Officer U.B. Pravin Rao said in a statement.
The company reported a 3.5 per cent growth in its consolidated net profit for the quarter ended March 31.
Infosys, which provides IT services to clients like Apple Inc, Volkswagen AG and Wal-Mart Stores Inc, also said fourth-quarter net profit reached 30.97 billion rupees, from 29.92 billion rupees a year earlier.
Analysts, on average, were expecting it to make 31.86 billion rupees.
Revenue, two-thirds of which comes from clients in the United States and Europe, rose 4.2 per cent in the quarter to 134.11 billion rupees, as the company added 52 new clients.
Shares of Infosys fell more than 5 per cent after the earnings release.
Last week, bigger rival Tata Consultancy Services Ltd posted weak revenue numbers, worrying money managers that the slowdown seen by India's largest software services exporter could be an indicator of an industry-wide trend.
Researcher Gartner earlier this month said worldwide IT spending was set to fall 1.3 per cent from last year to $3.66 trillion in 2015, blaming the slowdown mainly on the rising US dollar.
(Agencies)
Tags assigned to this article:
it top 2 infosys technology vishal sikka financial results ub pravin rao