Influence Management And Its Know-Hows 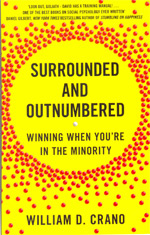 08 November, 2014
Print this article Font size -16+
An opinion given by a majority is always assumed to be right in our everyday life. And one is expected to comply with it. However, the minority, be it in workplace or in your friends circle, attempt to influence the majority in order to convince them of its point of view — without much success. In his book Surrounded and Outnumbered, William D. Crano, a social psychologist, explains exactly how to achieve this. Crano simply tells how to use the science of persuasion to win people over, more so in situations where the few can influence the many.
A Professor of Psychology at Claremont Graduate University and a former NATO scientist, Crano has propagated a thought process all throughout this book that being outnumbered and overmatched does not inevitably ruin a person’s persuasiveness. The author has cited numerous examples from both ancient as well as recent past where the powerful did not always win the influence game and the weak did not always lose it. One example is worth citing — Dr. Jonas Salk, the father of polio vaccine — many established scientists of his time viewed him as an outsider, a lightweight technician who did not fit in the more rarefied world of orthodox scientists. It took dogged determination and tenacity from Salk and 20 whole years before American Medical Association (AMA) judged the proponents of Salk, an enormous success. Crano says that Salk’s case is not an exception and cited similar instances like that of Charles Darwin, Thomas Jefferson, Steve Jobs, etc. These icons started out with no apparent power, no influence, few obvious possibilities of success and almost no advocates; what’s more they often were targets of an unfriendly majority. But in one way or the other, their ideas were adopted, their visions realised.
The author goes on a mission to explore how people like Salk succeeded? Crano has applied the science of persuasion to such cases of being outnumbered and overmatched; and has discovered strategies such as, as his university web site quotes, “working from the inside and changing the game from subjective preferences to objective decisions”, initiate actions that can cause the majority to bend and make concessions on issues related directly or indirectly to the focus of contention, etc. He, further goes ahead and refines these strategies into a collection of seven rules that, he claims, radically affect the likelihood of success. A few of the rules Crano offers in the final chapter:
According to Crano these rules must be followed if minorities are to be successful in persuading majorities to change. Be it implementing new policy in work place, or choosing an eatery for hanging out with friends, influence management plays an inherent role in implementing theories and opinions of the minority.
Tags assigned to this article:
book review bwbooks7list william d crano surrounded and outnumbered rules of influence headline publishing group persuasion influence management