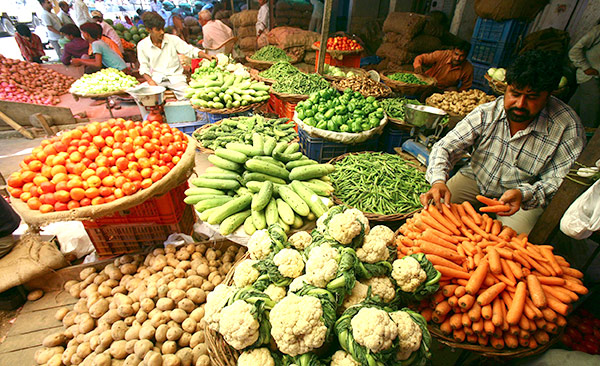 08 April, 2015
Print this article Font size -16+
Persistent deflationary pressures pulled down the rate of price rise to a record (-)2.06 per cent in February - keeping inflation in the negative zone for the fourth straight month - on account of cheaper food, fuel and manufacturing products, raising industry clamour for further cuts in interest rate.

Experts cautioned however that unseasonal rains this month could be a dampener and the decline in food inflation may be short-lived, prompting the Reserve Bank to avoid lowering rates immediately.

"There is a low likelihood of a rate cut in the April monetary policy review, notwithstanding the lower-than- expected WPI print for February. We expect further repo rate cuts to be limited to 50 basis points in the remainder of 2015," ICRA Senior Economist Aditi Nayar said.

As per official data released today, inflation in food articles category stood at 7.74 per cent, and the in manufactured products category, it was 0.33 per cent.

Fuel and power inflation saw significant cooling at (-)14.72 per cent in February.

In the food basket, while inflation in onions, pulses and protein-rich items like egg, meat and fish inched upwards, vegetables, fruits and milk saw the rate of price rise decline during the month.

Inflation in vegetables stood at 15.54 per cent in February, lower than 19.74 per cent in the previous month.

"The decline in food inflation will be short lived as unseasonal rains have already started to have an effect on production. We expect the government to act pro-actively as food inflation is likely move up from the next month onwards," Deloitte (India) Senior Director Anis Chakravarty said.

Negative inflation is largely driven by price trends in the fuel and manufactured goods segment. Besides, subdued global commodity prices have aided softening of inflation.

Industry chambers pitched for further measures to strengthen the demand and urged RBI to continue with its rate cutting cycle in the coming months.

"Government and RBI should also engage with the banks to ensure that the lowering of policy rates already effected is passed on to the investors and consumers in the form of lower lending rates," Ficci said.

Lowering of interest rates and easy credit availability should be the top priorities of the Government and the RBI".

The WPI inflation numbers would be taken into account by the Reserve Bank for formulating its next monetary policy announcement, scheduled on April 7.

The RBI has lowered policy rates by 0.50 per cent between January and March to prop up growth as it saw inflationary pressures easing.