Sydney [Australia], November 15 (ANI): Ahead of the limited-overs series against Australia, the Indian team had a fielding session with coach R Sridhar on Sunday.
On Saturday, the entire Indian contingent tested negative for coronavirus and started their training. Though India have begun training, they will remain in quarantine for the first two weeks of their stay in Australia.
"#TeamaIndia is back on the park and we turn our attention to fielding. @coach_rsridhar #AUSvIND," the Board of Control for Cricket in India (BCCI) tweeted. 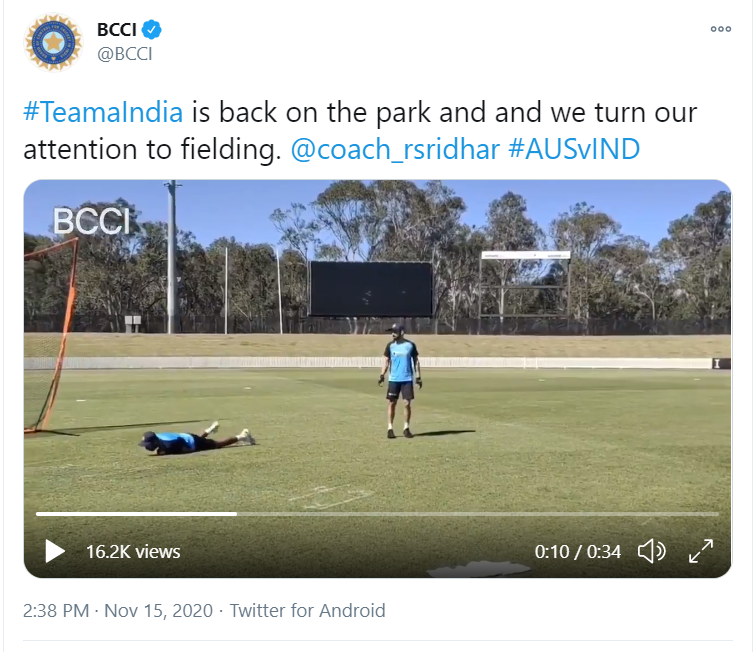 Virat Kohli-led side will begin their Australia tour with white ball fixtures as the One Day Internationals (ODIs) would be played on November 27, 29, and December 2 at Sydney Cricket Ground and at the Manuka Oval in Canberra respectively.
The first T20I will also be played in Canberra on December 4 and the rest two on December 6 and 8 at the Sydney Cricket Ground.
Also, the Indian side is set to play four Tests against Australia which will be a part of the Test Championship and the winner gets one step closer to the final which is expected to be played at the historic Lord's in June 2021.
With India sitting at the top of the points table in the Test Championship and Australia second, it is expected to be a thrilling contest with the first Test set to be played under lights from December 17 to 21 at the Adelaide Oval.
Earlier this week, the BCCI announced that skipper Kohli will be missing three Test matches in the upcoming series against Australia. Kohli has been granted paternity leave and as a result, he will be featuring in just the opening Test of the four-match series.
BCCI had also confirmed that Rohit Sharma will be rested for the white-ball leg of the Australia tour and he will be a part of the Test squad. (ANI)