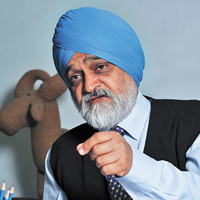 08 November, 2014
Print this article Font size -16+
Admitting having a 'special affection' for capital markets, Planning Commission Deputy Chairman Montek Singh Ahluwalia said on Wednesday, 1 May 2013 it is this segment of economy where India has moved closest to the international standards.

Calling for a greater global benchmarking of Indian capital markets going forward, Ahluwalia also said that markets in India has withstood the pressures of the time very well and has come a long way over the years.

Ahluwalia, who was instrumental in setting up of capital markets regulator Sebi during his tenure at Finance Ministry in the late 80s, said that the Indian market has made a significant progress since then and going forward it needs to be even more benchmarked against global standards.

"I must say I have a special affection for capital markets," Ahluwalia said, adding that nowadays he is not that much associated with the markets.

He was speaking at the closing day of a three-day meeting of Asia Pacific Regional Committee of IOSCO here, hosted by Sebi.

IOSCO is a global body of securities market regulators from across the world and Sebi is a prominent member of this grouping.

Talking about Ahluwalia's association with capital markets, Sebi Chairman U K Sinha said that Ahluwalia had also served as an appellate authority for the market regulator when SAT was not in place and the government used to hear pleas against Sebi orders.

Sinha said amid a peel of laughter that Ahluwalia says he used to feel thrilled when eminent lawyers of the country used to appear before him and address him as 'My Lord'.

"In capital markets, we are already closest to where India should be as per global standards," he said, while adding that banking is another big area but regulations there are comparatively stricter.

"FII inflows have also proved to be quite stable source of financing," he said.

Ahluwalia recalled that the idea to have a separate capital markets regulator came in the 1980s when he was in the Finance Ministry and Rajiv Gandhi was Prime Minister.

"We told him about the need to have a separate regulator. After much discussions, we set up Sebi initially as a non- statutory body as it would have required much change of laws otherwise," he said.