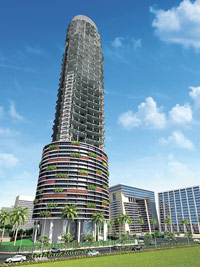 Shares of four Indiabulls firms on 08 August' 2012 plunged sharply after a Canada-based research firm pointed out serious irregularities in the group, which in turn warned of criminal proceedings against the authors of the report for “an intentional act for profiteering’’.

The stocks went into a tailspin after a Veritas Investment report about Indiabulls surfaced at the broker terminals and in dealing rooms here this morning, wherein promoters of the group have been accused of sacrificing corporate governance to enrich themselves, besides other allegations.

Canada-based Veritas has hogged the limelight in recent months with its equally damning reports about other Indian entities — Reliance Group, DLF and Kingfisher.

Veritas’ Neeraj Monga, who has authored most of its reports about Indian companies, did not reply to queries on whether the research firm had contacted Indiabulls before publishing its latest report.

Reacting to the report, Indiabulls said in a statement that it “will initiate appropriate criminal proceedings on the authors of the research report for publishing false and factually incorrect data, to create sensation and entice people for benefitting through trading, for the sole purpose of selling their research reports for money.”

Queries sent to Monga on whether Veritas has heard anything from Indiabulls after the report was published remained unanswered.

Claiming that the report contained intentional error on basic factual data, which is resulting into loss for thousands of shareholders, Indiabulls said that erroneous figures demonstrate “the malafide intentions and criminal actions under Indian Penal Code.

“We firmly believe that this is not an oversight but an intentional act for profiteering.”

In a detailed rebuttal of the points made in Veritas report, Indiabulls said: “The allegations made are factually incorrect and have ignored disclosures in public domain made through the annual reports of FY 2011 and FY 2012, which have also been circulated to all shareholders.”

Veritas report has said that public disclosures made by IndiaBulls Real Estate and IndiaBulls Power are unreliable and that the sole purpose of Indiabulls Real Estate “is to bulk institutional and retail investors for the benefit of select insiders."