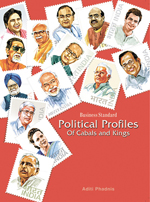 The awkward title should not put potential readers off this book. Aditi Phadnis has watched politicians for a long time. She does not fall into the stereotype of the political correspondent who gets stories by cultivating a few politicians. She has a sharp and critical eye, and does not refrain from being frank for fear of losing privileged access. This volume is a joint exercise with her colleagues, so the style and quality of various portraits vary. But there is enough insight and information in it to make it worthwhile.

Some of the best portraits are of people who are public stereotypes — for instance, Amar Singh, Rajnath Singh, Lalu Prasad Yadav — because they throw fresh light on such stale figures. The portrait of Amar Singh is based on an interview, and fills in less known facts about him — for instance, that he made his debut in the industrial alcohol market in the proverbially corrupt Uttar Pradesh. Rajnath Singh, when he was education minister, made copying in examinations an offence and sent 14-year olds to jail.

It is not surprising, but still delicious information that Lalu made his favourite kebab maker a member of the Bihar legislative assembly. The article on Arun Jaitley, based on an interview, goes far to explain how such an intelligent man became leader of such a stupid party. This is a good bedside book; a portrait a night will ensure good sleep for a month.