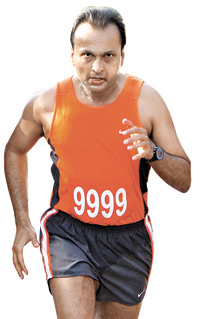 08 November, 2014
Print this article Font size -16+
Almost every morning, come rain or shine, Anil Ambani laces up his running shoes and hits the road. The Reliance Group chief is known for his discipline in completing his daily workouts and regularly participating in marathons. Rashesh Shah of Edelweiss, Sajjan Jindal of the JSW Steel, and N. Chandrasekaran of TCS are also avid marathoners. Intel Capital’s R. Sivakumar is an avid cyclist. Rajiv Bajaj is known for not missing his yoga routines, while Yash Birla pumps iron and also practises yoga. Sunil Mittal tries never to miss his daily walk or workout, and PVR’s Ajay Bijli has a home gym to work out at leisure.
Once upon a time, Indian business tycoons and CEOs did not bother much about their health or fitness. Most spent long hours in office, ate fairly unhealthy stuff, and did not have much use for workouts or personal trainers. Now, quite a few of them are known for their fitness routines and their discipline in all matters to do with nutrition and exercise. Yes, they still work insane hours, travel non-stop around the world, and routinely deal with enormous work stress. But there is a whole band of managing directors and CEOs today who are also known never to miss a workout, have built well-equipped home gyms, and have hired personal trainers.
Mickey Mehta, a wellness and life coach who started off as a fitness trainer for many India Inc. celebrities, says it’s imperative for any organisation head to be healthy, after all running a multi-billion business is not for the weak-hearted. In fact, Mehta says he hasn’t seen anyone as disciplined and sincere about the workout regime —including weights, running (but, of course) and attending fitness bootcamps — as Ambani, who once weighed close to 100 kg. Now, known as the ‘marathon man’, Ambani reportedly runs a hundred kilometres a week.
The mark of a fit billionaire, say fitness experts, is self-discipline — starting the day early (between 5-6 am for most), exercising regularly (go for a run, cycle, among other options), reining in the stress (yoga and meditation do wonders) and, most importantly, eating healthy (balanced meals).
So even if all these head honchos wouldn’t blink an eye while signing off on the $18,713 bill for The Frrrozen Haute Chocolate (rated as the most expensive dessert by BBC) at New York’s Serendipity 3 restaurant, their multi-billion-dollar hearts may just skip a beat imagining the horrors that the (reportedly) 1,000-plus calories would do to their super-toned bodies.