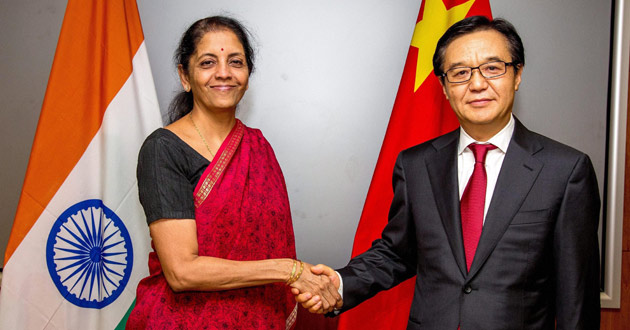 08 November, 2014
Print this article Font size -16+
Prime Minister Narendra Modi's Look East policy continues to hold sway. His recent trip to Japan yielded promises of over $35 billion investment over five years indicating Japan clearly thinks of India as a good place do business in. But the growing bonhomie with Japan does not mean that ties with China have become strained. Ever since coming to power, Modi government has been consistently trying to improve trade reciprocity between the two countries and getting the Asian giant to invest more in India.

On Monday (8 September), India asked China to invest in setting up manufacturing units in the country to bridge the widening trade deficit and create jobs in the country.

The seriousness of India could be seen from the fact that external Affairs Minister Sushma Swaraj said Prime Minister Narendra Modi's recent "expansionist" remarks in Japan did not refer to China. Swaraj said "he never referred to any specific country. It was media's guess. He spoke about 18th century expansionism."  Modi's remarks of an "expansionist" mindset of some countries while in Japan, had riled the Chinese official media which said the Indian leader is more "intimate with Tokyo emotionally".

Meanwhile, Commerce and Industry Minister Nirmala Sitharaman said India has signed an agreement with China in June to set up Chinese Industrial Parks in India. "We are expecting Chinese to come and invest in India. We have been able to convince Chinese to manufacture those goods which they export...It is going to create more jobs in the country," Sitharaman told reporters here.

She also said that both India and China are expecting announcements during the forthcoming visit of Chinese President Xi Jinping to India this month.

"With regard to Chinese President visit, we are expecting a lot and they are also expecting a lot...hopefully there will be lots of announcements," she said.

In the last three months, Sitharaman has visited China twice and discussed various ways to enhance trade and investment between the countries.

On her first visit to China, Commerce Minister Nirmala Sitharaman held talks with her Chinese counterpart Gao Hucheng during which she flagged India's concerns over the trade deficit which averaged over $35 billion a year and sought greater access to Indian goods and services.

The two sides later signed the MOU on Cooperation on Industrial Parks India to facilitate more Chinese investment in India to compensate the ballooning trade deficit, which now average around $35 billion a year. The bilateral trade totalled to $65.47 billion last year.

India has time and again sought greater market access for Indian goods and services in the Chinese market. India is asking China to open its market for Indian IT and Pharmaceuticals besides stepping up investments to compensate the trade deficit.

India is expecting China to set up four industrial parks in different states.

On her second visit to China since the new government came to power in May, Sitharaman on 2 September had said China had shown keen interest to commit major investments in India besides addressing its concerns over mounting trade deficit.

Briefing the Indian media in Beijing Sitharaman had said last week that expectation are high about large-scale Chinese investments in India which could be announced during Xi's visit, expected in the third week of this month.

"I can safely say that there is lot of interest and keenness" on the part of Chinese side to make Xi's visit a big success, she said.

"As much as we are working, they are also working to have good decisions announced during this high-profile visit."

India invited China to set up several such parks to address the trade deficit, which Indian officials say is averaging $35 billion per annum.

The export growth was significantly lower than the 14.5 per cent rise in July, but higher than June's 7.2 per cent.

In August, China's imports continued to contract unexpectedly and stood at $159 billion, a year-on-year decrease of 2.4 per cent, after dropping 1.6 per cent in July, the General Administration of Customs (GAC) said in a statement.

(with inputs from Agencies)