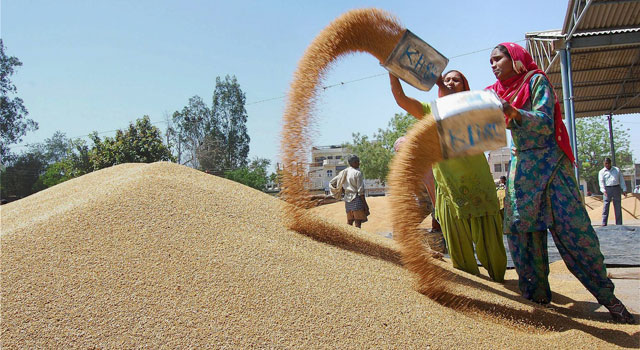 02 December, 2014
Print this article Font size -16+
India has reached an agreement with the United States on public stockpiling of food, Commerce and Industry Minister Nirmala Sitharaman said on Thursday, paving the way for the implementation of a global trade deal that has been stalled for months.
"India and the United States have resolved their differences on public stockholding of food," Sithamaran said.
"This opens the way for implementation of the WTO trade facilitation deal."

The proposals will be reviewed by the World Trade Organization's (WTO) General Council, she added, expressing the hope that approval would clear the way for India to sign a protocol enabling implementation of the trade accord.
The minister said that many nations saw merit in India's stand at WTO and that the US has also "appreciated and now openly supported our concerns on public stockholding."
"India has never obstructed trade facilitation. We were only trying to safeguard our farmer's interests," she added.
"On the basis of this breakthrough with India, we now look forward to working with all WTO Members and with Director-General Roberto Azevedo to reach a consensus that enables full implementation of all elements of the landmark Bali Package, including the Trade Facilitation Agreement," US Trade Representative Michael Froman said in a statement.

USTR said the US-India agreement meant the trade facilitation agreement should be implemented without conditions. It made clear that WTO members would not challenge food security programmes under WTO dispute settlement procedures until a permanent solution had been agreed and adopted.
At the end of July, India pulled the plug on implementing a Trade Facilitation Agreement struck in Bali last year, linking it to the issue of rural poverty in the country of 1.25 billion people.
India had wanted indefinitely to extend a "peace clause" to protect a subsidised food distribution scheme until the WTO can strike a definitive deal on stockpiling. In Bali, the WTO agreed that the clause would expire in four years.
The trade row plunged the WTO into its worst crisis in two decades, as the Western bloc led by the United States considered abandoning the principle of consensus under which the 160-nation group works.
India made it clear that it would not ratify the TFA until a permanent solution was found on the food subsidy issue.
India refuses to bow to calls by the Western-led bloc to scale back a scheme to buy wheat and rice that it distributes to 850 million people.
Indian Finance Minister Arun Jaitley said recently the dispute was not with regard to trade facilitation, but reaching a deal had become a victim of "unreasonable posturing by some countries."
Tags assigned to this article:
wto top 1 trade world trade organization food subsidies michael froman trade facilitation agreement nirmala sitharaman

US Companies Come In Support Of Workers On Abortion