India To Speed Up Work On Rail Lines To Transport Coal 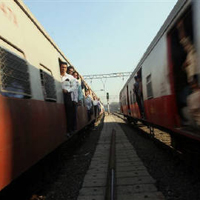 08 November, 2014
Print this article Font size -16+
Government said it would speed up work on three railway lines key to transporting 100 million tonnes of coal per year from remote mines, a priority for Prime Minister Narendra Modi who wants to supply continuous power to all.

Coal India Ltd, the world's No. 1 coal miner that controls about 80 per cent of India's output, says better connections could push its annual production up by as much as 300 million tonnes from 462 million now.

Work on some of the railway lines started nearly a decade ago but delays with land acquisition, environmental clearance and complex relations between regional and central government have hampered their progress.

The result is higher imports and shortage of coal used in power generation, leading to frequent blackouts including in the capital city of Delhi. India is the third-largest coal importer despite sitting on the fifth-largest reserves.

To discuss how to sort out the issues, Railway Minister D.V. Sadananda Gowda and Power and Coal Minister Piyush Goyal agreed on Thursday to work closely, and fast-track construction of 286 km of railway lines under three projects in the coal-bearing states of Jharkhand, Odisha and Chhattisgarh.

"(The) Railway Minister gave instructions for better coordination among various stake holders and all concerned officers were given instructions to comply with timelines for construction of these lines," a government statement said.

The timeframe for completion of lines was not known but Coal India Chairman S Narsing Rao earlier told Reuters that state-owned Indian Railways had promised some of the stretches would be ready by 2016.

An Indian Railways spokesman could not be contacted outside regular business hours.

The statement said senior government officials could visit Jharkhand and Chhattisgarh next week to "sort out the pending issues of land acquisition and forest and environment".

Modi, whose landslide election victory came largely on his promise to rejuvenate India's economy after years of slowdown, wants to provide round-the-clock power supply to the population of about 1.2 billion. Millions still go without power.

As coal is the main source of power generation, Modi wants to reform the nationalised coal sector by bringing in private investment and possibly breaking up Coal India.

Without a meaningful jump in domestic output, India's coal shortage could range between 185 million tonnes and 265 million by 2016/17, according to projections from the previous government. Shipments rose 21 percent to 152 million tonnes in the calendar year 2013, data from research firm OreTeam showed.

India was estimated to have spent $14 billion on coal imports in the fiscal year ended March 2013, and that figure is likely to rise to $25 billion by 2016/17, according to the Boston Consulting Group.

Indonesia, Australia and South Africa are the main suppliers to India.