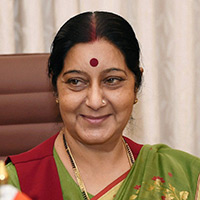 08 November, 2014
Print this article Font size -16+
Seeking deepening of ties with ASEAN, India on Saturday (9 August) said it would soon draft a five-year plan of action starting 2016 to take the "trajectories" of common interests with the 10-member grouping to a new level and particularly emphasised on improving connectivity in the region to further boost trade and people-to-people contact.

In her address at the 12th India-ASEAN meeting here, External Affairs Minister Sushma Swaraj said the new government in India would like to stand with the grouping and take the relationship forward so people's aspirations for growth and development could be fulfilled.

"As you are on the brink of achieving your long cherished goal of the ASEAN Community by 2015, I bring to you the assurance of the new Government in India that we would like to stand with you and take the trajectories of our common interests higher in the coming years, both in terms of achievement and relevance to our bilateral ASEAN+1 relationship and also in terms of the multilateral ambition at the regional and global levels," Swaraj said in her first engagement at multilateral fora.

Strongly pitching for improvement in connectivity, she said India wanted connectivity in all its dimensions ? geographic, institutional and people-to-people. She also referred to 5Ts of government of India ? Tradition, Talent, Tourism, Trade and Technology - reflecting priority areas and noted that in foreign policy connectivity precedes them all.

"To the 5 Ts of the Government of India - Tradition, Talent, Tourism, Trade and Technology, I would like to reiterate the value of a 'C' before them all in foreign policy - the 'C' of connectivity in all its dimensions, geographic, institutional and people-to-people. I would like this 'C' of connectivity to translate into tangible and urgent action on the ground, bringing our capacities together to mutual benefit," she said.

Talking about taking forward the ASEAN-India ties to the next level, she said India will soon draft an action plan in this regard. "We have an impressive array of 26 cross-sectoral annual dialogue mechanisms between ASEAN and India. We should soon be drafting our next Plan of Action for 2016-2021."

"The ASEAN-India strategic partnership owes its strength to the fact that our 'Look East' to ASEAN meets your 'Look West' towards India. There is synergy and a sense of fraternity in our partnership, as we look towards a shared future of peace and stability, economic growth and prosperity in our region," Swaraj said.

The External Affairs Minister described the Vision Statement and the report of the ASEAN India Eminent Persons Group as "good reference points" but insisted that the interpretation of these "needs to be grounded in the geo- political realities of today and the common aspirations of our people for growth and development."

The ASEAN-India Eminent Persons group had suggested measures to improve the ties in diverse areas.

Swaraj said the "overwhelming involvement" of people across ages and professions in the various events that year in all the ASEAN countries and India were evidence of the "deep and longstanding connections between our countries, past and present".

"I am looking forward to now working with you all for taking these sentiments of comfort and collaboration between us to new heights across the three pillars and bring greater speed to some long pending issues," she said.

There has been significant progress in ties between India and the ASEAN grouping in the last few years in diverse sectors, particularly in trade and commerce.

India and the ASEAN have already implemented a free trade agreement in goods and are set to widen its base and include services and investments. The India-ASEAN Trade in Goods Agreement was signed in August 2009 and it came into force on January 1, 2010.

In her address, Swaraj also congratulated Myanmar on becoming Chair of the ASEAN.

"We are delighted to be part of this moment of achievement for Myanmar, as ASEAN Chair."