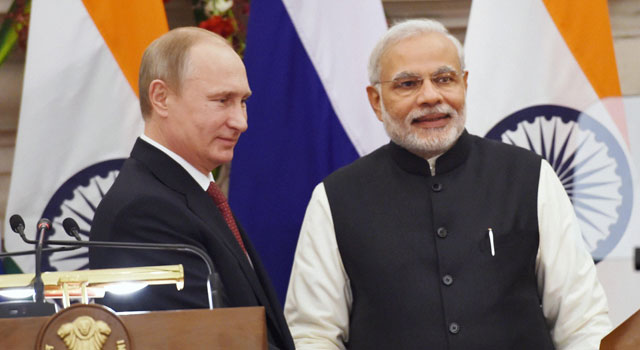 The CII will be organising a CEOs delegation representing leading Indian Businesses at SPIEF and at the India Russia Business Roundtable. The business delegation will be led by Mazumder and the members will also participate in the B20 Turkey Regional Consultation Forum. An India Reception will also be organised coinciding with St Petersburg International Economic Forum (SPIEF).

“The Druzhba-Dosti Joint Statement of President Putin and Prime Minister Modi in December 2014 sets the stage for expansion of the bilateral economic engagement in many dimensions, including trade, investment, defence, and energy.,” stated Mr Sumit Mazumder, President, CII.

The commerce and indusry minister, Nirmala Sitharaman, will lead the Indian delegation for the SPIEF 2015 to be held at St. Petersburg, Russia, on 18-20 June 2015. She will be addressing the Russia-India Business Roundtable which will also be addressed by H. E. Alexey Ulyukaev, Minister for Economic Development of the Russian Federation.

India-Russia trade waned to $9.5 billion in 2014 with Indian exports at $3.2 billion and imports from Russia at $6.3 billion, as per data from the Russian Customs. According to CII, this level is not commensurate with the size of the two economies.

Investments in both directions have been robust. India has invested a cumulative $8 billion in Russia, primarily in energy, while Russia has brought in $4 billion into India.

"CII has identified the sectors of oil and gas, nuclear energy, pharmaceuticals, chemicals, automotives, heavy engineering and machinery as areas of synergy. “Russian capabilities in infrastructure are well-respected, and we would like Russian companies to participate in the Indian tender system for public-private partnerships,” said Chandrajit Banerjee, Director General, CII.

“However, we need to address issues of information gaps through the India-Russia Business Roundtable.”

CII has co-hosted the India-Russia Business Roundtable with its Russian partner, Business Council for Cooperation with India (BCCI) since 2009 when it was first held.

The forum has emerged as an excellent platform for bringing together Indian and Russian government leaders with business. Cooperation between the private sectors of the two sides is sought to be enhanced to expand economic relations.
Tags assigned to this article:
india news 7 narendra modi bilateral trade cii vladimir putin russia nirmala sitharaman sumit mazumder