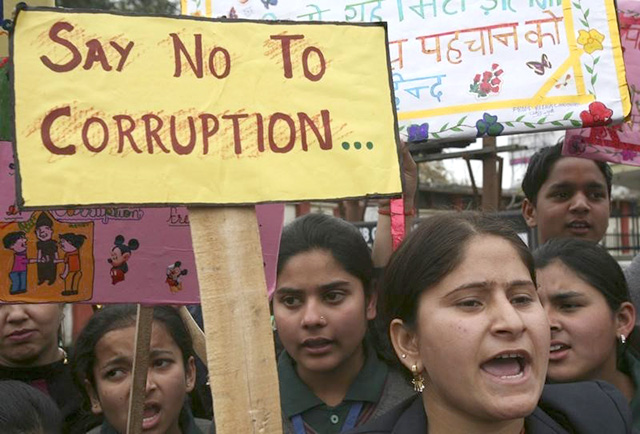 14 January, 2015
Print this article Font size -16+
Crime and corruption are draining a record $1 trillion a year from poor and middle-income nations with the disappearance of dirty money hitting some of the world's poorest regions hardest.
India is ranked third globally with an estimated $94.76 billion (Rs 6 lakh crore) illicit wealth outflows in 2012, according to US-based watchdog Global Financial Integrity (GFI) that exposes financial corruption.
The cumulative illicit money moving out of India over a 10-year period from 2003 to 2012 has risen to $439.59 billion (Rs 28 lakh crore), as per the latest GFI estimates.
A record $991 billion in unrecorded funds left 151 developing and emerging economies in 2012, up nearly 5 per cent from a year earlier.
The biggest outflows were from the so-called BRICS economies that include Brazil, China, India and Russia.
GFI's sixth annual report found between 2003 and 2012, the estimated amount of illicit funds shifted from developing countries totalled $6.6 trillion, the equivalent of nearly 4 per cent of the entire global economy, and rose at an inflation-adjusted 9.4 per cent a year - roughly double global GDP growth.
Largest Outflow
China, Russia, Mexico, India, Malaysia saw the largest outflow of dirty money - the proceeds from shady business, crime and corruption - over the decade and also in 2012.
Sub-Saharan Africa suffered the biggest loss as a share of its economy, with the disappearance of dirty money averaging 5.5 percent of GDP. Nigeria and South Africa were among the top 12 nations with the largest volumes of illicit outflows.
GFI President Raymond Baker said the estimated losses were conservative but were still more than 10 times the total amount of foreign aid these countries received. He called the growth rate "alarming", having surged from about $297 billion in 2003.
"Illicit financial flows are the most damaging economic problem plaguing the world's developing and emerging economies," Baker said in a statement.
"It is simply impossible to achieve sustainable global development unless world leaders agree to address this issue head-on."
Asia was the region of the developing world with the greatest flow of dirty money over the decade, accounting for 40.3 per cent of the world total, driven by China.
But the researchers found growth of illicit flows was faster in other parts of the world, particularly in the Middle East and North Africa and in sub-Saharan Africa, where the growth was seen at 24.2 per cent and 13.2 per cent respectively.
The GFI research found fraudulent mis-invoicing of trade transactions was the most popular method to move money illegally and accounted for nearly 78 per cent of illicit flows in 2012.
How Money is Moved
Money is moved overseas through trade mispricing by fraudulent underbilling or over-invoicing for goods to avoid tax or to hide large transfers.
Baker called for the United Nations to next year include a target to halve all trade-related illicit flows by 2030 as it negotiates a new set of global goals, the Sustainable Development Goals, to replace the Millennium Development Goals.
The report,  authored by GFI chief economist Dev Kar and junior economist Joseph Spanjers, tracks illegal money flowing out of 151 developing countries using trade and balance of payments reports filed with the International Monetary Fund. Its data provides an estimate as illicit flows cannot be precisely measured.
Spanjers said the trillion dollars lost from these economies in 2012 could have been invested in local businesses, healthcare, education or infrastructure.
"This is a trillion dollars that could have contributed to inclusive economic growth, legitimate private-sector job creation, and sound public budgets," he said.
Tags assigned to this article:
black money news 5 china saudi arabia russia mexico malaysia illicit money global financial integrity joseph spanjers raymond baker