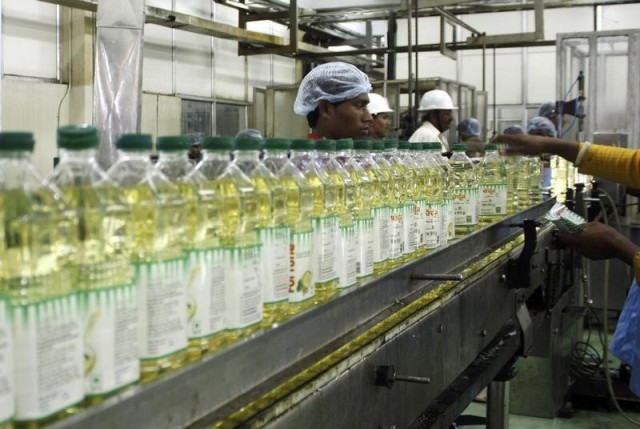 14 January, 2015
Print this article Font size -16+
Government has raised the import tax on crude edible oils and refined oils by 5 percentage points each to protect local farmers from rising imports from Malaysia and Indonesia.
In an order made public on Thursday, it said the import tax on the crude variety of vegetable oil would rise to 7.5 percent from 2.5 percent, while that on refined oil would rise to 15 from 10 percent with immediate effect.
India is the world's biggest vegetable oil importer. It meets nearly 60 percent of its 18-19 million tonnes of annual demand from overseas, mostly in the form of palm oil from top producers Indonesia and Malaysia.
The increase in import duties is expected to hit Malaysian palm oil futures, the regional benchmark.
Still, the food ministry had sought to double the tax on crude edible oils while increasing that on refined oils by 50 percent.
Hit by cheaper vegetable oil imports from Malaysia and Indonesia, industry body the Solvent Extractors Association of India (SEA) had petitioned the government to raise the import duty on crude vegetable oils to 10 percent and 25 percent on refined products.
B V Mehta, executive director at the SEA, welcomed the government's move but said it was not enough to safeguard the local producers.
"The government should have ensured at least 15 percent of duty differential between crude and refined oils to help the local industry," he said.
Both palm oil exporters Indonesia and Malaysia will soon calibrate their export duties to encourage exports of refined oils at the expense of the Indian refiners, Mehta said.
A rising population, increasing prosperity and low oilseeds output are stoking vegetable oil demand in India.
In the year that began in November, India is likely to import a record 13 million tonnes of edible oils, a leading importer said in September, up from an estimated 11.6 million tonnes, including 8 million tonnes of palm oil, the previous year.
(Reuters)
Tags assigned to this article:
news 7 trade imports indonesia malaysia edible oil solvent extractors association of india