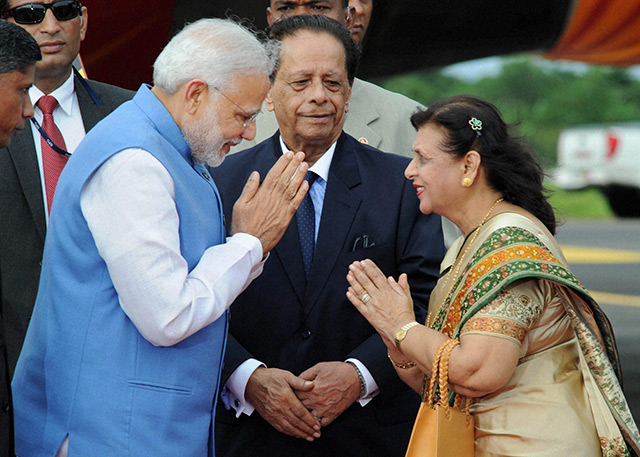 16 March, 2015
Print this article Font size -16+
India has offered $500 million concessional line of credit to Mauritius for key infrastructure projects even as the two countries agreed to continue negotiations on hammering out a revised double tax treaty to prevent its "abuse".
The two countries also signed five agreements, including one on developing ocean economy, after talks between Prime Minister Narendra Modi and his Mauritian counterpart Anerood Jugnauth on the first day of his two-day visit to this strategic Indian Ocean island nation.
"I was pleased to offer a concessional line of credit of $500 million for civil infrastructure projects for Mauritius. We intend to quickly build the petroleum storage and bunkering facility in Mauritius," Modi said at the signing of the pacts.
Addressing a joint news conference with Modi, Jugnauth said he had raised with the Indian Prime Minister issues related to the Mauritius-India Double Taxation Avoidance Agreement (DTAA).
"We appreciate that already India postponed the consideration of the GAAR until 2017. However, we have stressed on the initiatives taken by Mauritius to build substance within our offshore jurisdiction. I have requested PM Modi to give his full support on the DTAA as it is of prime importance for our global business sector," he said.
Modi in his response said the two sides agreed to continue negotiations on the revised treaty based on shared objectives to prevent the "abuse" of the convention.
He assured Mauritius that India will do nothing to harm its interests.
Modi also said that Mauritius offered India cooperation on information exchange on taxation.
"I also conveyed our deep appreciation for the support and cooperation offered by Mauritius on information exchange on taxation," Modi said.
The India-Mauritius Double Taxation Avoidance Agreement (DTAA) is being revised amid concerns that Mauritius is being used for round-tripping of funds into India even though that country has always maintained that there have been no concrete evidence of any such misuse.
Mauritius has been one of the biggest sources of Foreign Direct Investment (FDI) into India.
"I consider our security cooperation to be a cornerstone of our strategic partnership. Our agreement on cooperation in Ocean Economy is an important step in deepening our scientific and economic partnership," Modi said.
The five pacts signed included an MoU between the two countries in the field of 'Ocean Economy' which will provide an extensive framework for cooperation, a novel and critical area of sustainable development in the Indian Ocean Region.
The other agreements signed were an MoU for the improvement in sea and air transportation facilities at Agalega Island of Mauritius, MoU on cooperation in the field of traditional system of medicine and homoeopathy, programme for cultural cooperation between 2015-18 and a pact on import of fresh mango from India.
(PTI)
Tags assigned to this article:
news 4 investment narendra modi mauritius fdi anerood jugnauth