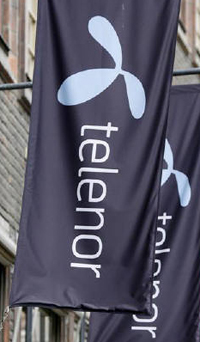 08 November, 2014
Print this article Font size -16+
India's mobile phone market is bound to consolidate after an expensive licensing process, helping Norway's Telenor turn a profit in the country after years of losses, finance chief Richard Olav Aa said.
The consolidation and further licence sales could present expansion opportunities, but Telenor is comfortable with its new size after giving up licences in several states when they got too expensive, Aa told a conference on 15 November' 2012.
"The marketplace will rationalise itself to a great extent in the next period," Aa told an industry conference. "You'll see more consolidation in India within circles."
Aa said that India's regions, or circles, with 70 to 80 million people could each support about five players, even though some have seven or more.
Telenor, which has over 150 million customers in Europe and Asia, won back the right to operate in six circles on Wednesday after courts had revoked licences awarded in a previous, corruption-tainted award process.
The firm originally operated in 13 circles but scaled back to nine this year and even threatened to exit the market if auction prices went too high.
Aa defended the reduced size, saying Telenor's cost model was superior, allowing it to compete with national players.
"While you do need scale in each circle you are in, we don't see the need to be pan-Indian so as to achieve the cost position we need to compete with Bharti and Vodafone," he said.
The market is so focused on voice traffic in urban areas Telenor can also save on infrastructure costs, he said.
"You have to remember that 70 per cent of revenue in India comes from people who use only voice minutes in a small area. You don't need to be everywhere, on highways and in every city to succeed," he said.
The firm also moved infrastructure from areas where it stopped operating, reducing capital expenditure needs further.
Should Telenor's current spectrum prove insufficient, the firm would consider purchasing more as not everything was sold in this week's auction.
Telenor chose to scale back its operations in India to save on capital spending after it promised shareholders to keep peak funding needs there under 155 billion rupees.
"They would have blown right through that cap if they had stayed in all those (nine) areas, so this shows that they are being disciplined," Morgan Stanley analyst Nick Delfas said.