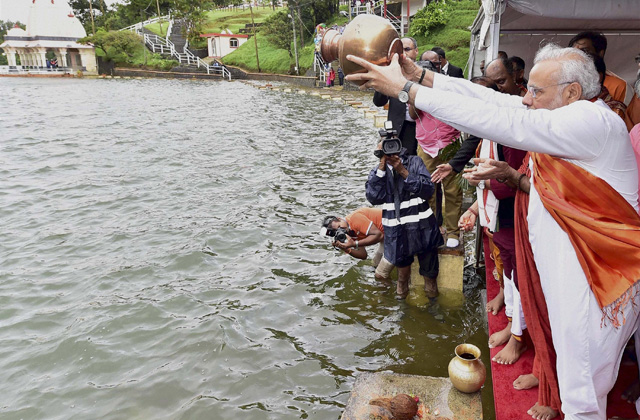 16 March, 2015
Print this article Font size -16+
"We will work together to avoid abuse of India-Mauritius double taxation treaty", Prime Minister Narendra Modi said on Thursday (12 March). "We will do nothing which could affect the vibrant banking sector in Mauritius", says Modi while addressing the country's National Assembly.
India and Mauritius have agreed to push forward their negotiations for a long pending revision of Double Taxation Avoidance Treaty (DTAT), asserting that their objective is to prevent the "abuse" of the convention.
Prime Minister Narendra Modi and his Mauritian counterpart Sir Anerood Jugnauth expressed this resolve during their talks in Port Louis on Wednesday (11 March) night even as India offered $500 million concessional line of credit to this key island nation for key infrastructure projects.
Negotiations to amend the bilateral tax treaty have been hanging fire for a long time amid India's apprehensions that it is being misused to route unaccounted money and evade taxes.
The two countries also signed five agreements, including one on developing ocean economy, after talks between Modi and Sir Anerood on the first day of his two-day visit to Mauritius on the second leg of this three-nation tour that will also take him to Sri Lanka tomorrow.
On other key bilateral economic issues, Modi said the two countries should resume their discussions on Comprehensive Economic Partnership Agreement.
In his response, Jugnauth said the Preferential Trade Agreement signed in August 2006 to further enhance market access should be reviewed and that the two countries have agreed on the way forward.
Addressing a joint news conference with Modi, Jugnauth said he had raised with the Indian Prime Minister issues related to the Mauritius-India Double Taxation Avoidance Agreement (DTAA).
"We appreciate that already India postponed the consideration of the GAAR until 2017. However, we have stressed on the initiatives taken by Mauritius to build substance within our offshore jurisdiction. I have requested PM Modi to give his full support on the DTAA as it is of prime importance for our global business sector," he said.
Modi in his response said the two sides agreed to continue negotiations for a revised treaty based on shared objectives to prevent the "abuse" of the convention.
"Over the past few years, we have discussed revision of Double Taxation Avoidance Convention. This is based on our shared objective of preventing abuse of the Convention, while enabling Mauritius to benefit fully from this arrangement. We have agreed to continue this discussion," Modi said.
"However, I have assured Prime Minister that we will do noting to harm this critical sector of one of our strongest strategic partners in the world," he said.
Modi also said that Mauritius offered India cooperation on information exchange on taxation.
"I also conveyed our deep appreciation for the support and cooperation offered by Mauritius on information exchange on taxation," Modi said.
The (DTAA) is being revised amid concerns that Mauritius is being used for round-tripping of funds into India even though that country has always maintained that there have been no concrete evidence of any such misuse.
A Joint Working Group (JWG) has been set up by the two countries to find a mutually acceptable solution.
Mauritius is one of the top sources of Foreign Direct Investment into India.
During the last Financial year, India attracted $4.8 billion from Mauritius. Between April-September this fiscal, there has been an inflow of $4.9 billion into India.
Finance Minister Arun Jaitley recently said Mauritius is yet to agree to certain proposals for revising the treaty.
"India has made certain proposals for revision of the DTAA to end roundtripping and other aspects. Mauritius is yet to agree to such revision," he told Rajya Sabha.
Jaitley said 10 meetings of the Joint Working Group on this issue has taken place so far, the last being in November 2013.
At his press conference here, Modi said, "I consider our security cooperation to be a cornerstone of our strategic partnership. Our agreement on cooperation in Ocean Economy is an important step in deepening our scientific and economic partnership."'
The five pacts signed included an MoU between the two countries in the field of 'Ocean Economy' which will provide an extensive framework for cooperation, a novel and critical area of sustainable development in the Indian Ocean Region.
The other agreements signed were an MoU for the improvement in sea and air transportation facilities at Agalega Island of Mauritius, MoU on cooperation in the field of traditional system of medicine and homoeopathy, programme for cultural cooperation between 2015-18 and a pact on import of fresh mango from India.
India also offered to establish a second cyber city in Mauritius after it helped the island set up the first one a decade ago.
Modi also welcomed Mauritius' decision to make India its preferential partner in developing its security capabilities.
Earlier, Modi yesterday called on Mauritius President Rajkeswur Purryag.
India also agreed to technically waiving off the visa fee for Mauritius nationals in respect of the new visa on arrival system.
(Agencies)
Tags assigned to this article:
india news 3 mauritius tax treaty prime minister narendra modi double taxation avoidance treaty sir anerood jugnauth