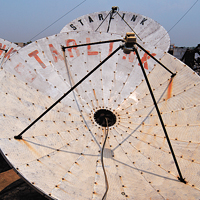 08 November, 2014
Print this article Font size -16+
Television companies across Asia assembled in the resort island of Bali to discuss and debate how to move beyond the region's 52-per cent pay-TV penetration rate against a backdrop of slowing subscriber gains. Media Partners Asia (MPA), a media consultancy and monitoring group, that organises this Asia Pacific Operators Summit every year, said just 26 million new pay TV subscribers were enrolled in 2013, the lowest annual growth rate since 2007.

The conference, attended by big networks, including Fox International channels, Star TV, Viacom, HBO Asia and Disney, also debated the threat of over-the-top (OTT) systems - the delivery of media over the internet directly to the consumer that circumvents the distributor network and thereby avoids payment to the broadcasters and content producers.

India however emerged as a bright spark in 2013 adding 21 million gross digital pay-TV subscribers across DTH and digital cable - a growth of 30 percent year-on-year. Digital cable interestingly stayed in the lead belying expectation that DTH would outstrip cable in India. Digital cable added 12 million subscribers compared to DTH networks that added 9 million. India is set to have 165 million pay-TV homes by 2018, up from 135 million last year, with about 55 percent of them being digital pay TV.

India's growth last year was mainly fuelled by the mandatory rollout of Digital Addressable System or DAS in Tier I and Tier 2 cities. However, the emphasis now for cable and DTH operators is turning to better average return per unit (ARPU) rather than just increasing subscriber base at heavy cost. The MPA report says the current ARPU of Rs 55-60 per subscriber per month for cable operators is way below viability levels and should reach Rs 120 at the very minimum to make the business a profitable one. The MPA report estimated that the top 3 cable networks or multi-system operators (MSOs) - Hathway, DEN Systems and InCable - had debt in their books in excess of Rs 3,200 crore.

DTH in India is also expected to see ARPU growth as operators leverage High Definition (HD) growth more aggressively. Making a debut at the APOS summit, Saurabh Dhoot, Director of Videocon and promoter of the the DTH latecomer - d2h, revealed his company had netted 11 million subscribers of which 7 million were active. "We have shifted gear from just grabbing real estate, to one of improving returns. All new subscribers are HD," he said.

The conference debated the challenges to the expansion of Pay TV being faced by many countries and markets. The MPA report refers to Thailand as the "big weak link" in this part of Asia, with the continued growth of free TV and free satellite, and the emergence of Digital Terrestrial Television (DTT) as a threat to the pay TV ecosystem. In India, pay TV's expansion in the mandatory Phase 3 and 4 of digitisation will be challenged by competition from Doordarshan's Freedish and wireless broadband. In a panel discussion on "Enhancing Pay TV's consumer proposition", Alan Hodges, MD, Asia Pacific, A+E Networks, pointed out that there was an absence of measurement tools on consumer use of pay TV and called for a 'common currency' for pay TV operators. Avi Himatsinghani, CEO of Rewind Networks, said the problem of Pay TV expansion was one of lack of communication and efficient execution rather than consumer resistance. "We are not doing enough to make consumers aware of the better content and services they are getting from pay TV," he said.

The conference also debated the rapid expansion of mobile and broadband. The mobile service TV Everywhere had 4 million customers last year, with MPA forecasting this will hit 15 million by 2018. Broadband, meanwhile, is booming, with subscriber numbers expected to rise from 575 million last year to one billion in 2018. Much of the conversation on this front was how to harness the internet-based OTT video delivery systems as another revenue stream and without impacting pay-TV revenues amongst representatives of multi-platform operators like StarHub and SingTel of Singapore, Astro of Malysia and Fox International Channels Asia, among others.

Though Pay TV penetration in Asia is expected to rise from 52 percent last year to 60 percent in 2018 largely thanks to India that is going to see a big boom in the 3rd and 4th phase of digitization, the general trend is one of deceleration. Addressing the challenge of expanding Asia's overall pay-TV base, Vivek Couto, executive director of MPA, noted: "Much of that will mean confronting what we have not done as an industry in terms of execution and marketing. Channels that do not have compelling consumer propositions across linear and nonlinear formats will not have a long-term future on the pay-TV dial in any of the key markets."

(The author attended the conference as an invitee of Star TV)