India Lags In IT Readiness 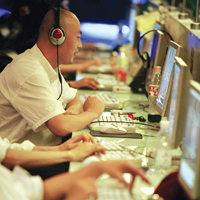 
Though India has slipped on the overall rankings, the market environment is assessed rather positively at 41st rank, and competition and low telephony costs gave a boost to India's readiness (33rd). It ranks an impressive 21st for its level of individual readiness and 33rd for that of businesses. Government readiness stands at 47th rank. Individual usage is improving, although from a very low base — India was ranked 98th in this category, 11 places higher than in 2010.

China is ranked 36th, a rank up from 2009. Since 2006, China has leapfrogged 23 positions, featuring among the 10 most dynamic countries worldwide. Four Asian economies besides Singapore feature among the top 20 — Taiwan (6th), Korea (10th), Hong Kong (12th)  and Japan (19th). Other Brics nations

Brazil, Russia and South Africa were ranked 56th (up four places), 77th (up two ranks) and 61st (up one place), respectively.

The index is composed of quantitative data collected by international organisations such as the International Telecommunication Union, United Nations, World Bank, and data from the executive opinion survey. The report is co-authored by Soumitra Dutta, the Roland Berger Professor of Business and Technology at INSEAD and Irene Mia, senior economist at the World Economic Forum.

Part of the GIT report, the Global Internet Values report, also states that a global culture is developing around the Internet. Worldwide, users are sharing similar values and attitudes towards online freedom of expression, privacy, trust and security.

Among emerging nations, the developing regions of Asia and Latin and South America are becoming dominant players online as they have the most users, despite lower levels of adoption.