New Delhi [India], October 27 (ANI/India PR Distribution): The Information Society Innovation Fund (ISIF Asia) is a program dedicated since 2008 to support Internet development in the APAC region. In 2020 four grants were allocated to research and development projects focused on the availability, reliability, and security of the Internet, with a particular focus on practical solutions around operational stability and security.
ISIF Asia is a program of the APNIC Foundation. The APNIC Foundation leverages APNIC's 25+ years of proven technical and developmental leadership in the Internet to build human and community capacity for Internet development in the region. As the Regional Internet address Registry (RIR) for the Asia Pacific, APNIC has a unique position as an authoritative, respected, and trusted not-for-profit.
The grant was given to the India Internet Engineering Society (IIESoc), a non-profit that brings together different stakeholders from the computer networking community across industry, academia, service providers, and government. It exists to further the adoption of IETF standards and increase awareness and participation in the IETF process from the subcontinent. IIESoc has been organizing an annual pre-IETF event in India called Connections and regular meetups called RFCsWeLove. IIESoc has signed an MoU with a US-based non-profit Industry Network Technology Council (INTC) working on a similar goal in the North America region.
ISIF Asia approved the grant for the "IPv6 Deployment at Enterprises" project to IIESoc to work collaboratively with INTC to address the issue of IPv6 adoption at large brick-and-mortar enterprises in the APAC region. 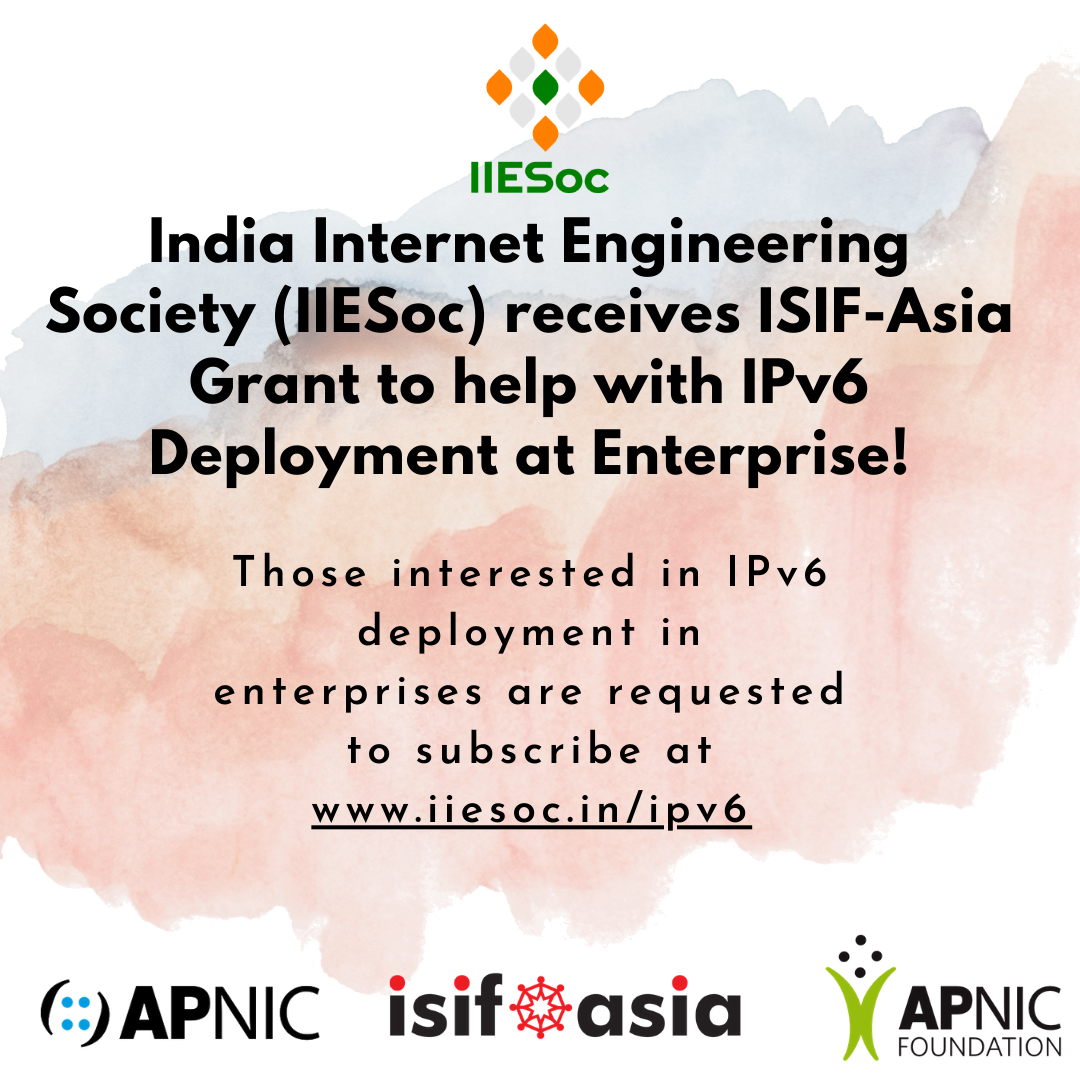 Participants from enterprises (especially in the APAC region) are requested to subscribe to the project mailing list to be updated with the upcoming IPv6 webinars series tailor-made for enterprises and the next steps towards increasing IPv6 deployment in Enterprises.
IPv6 adoption at large, brick-and-mortar enterprises has lagged. Many feel that unless this issue is addressed, the Internet as a whole will stall at an IPv6 adoption rate of about 60 per cent. There are many subsidiaries of large corporations in India. Such organizations primarily use IPv4 addresses. For example, one of the largest mobile providers in India, whose backbone is IPv6, has had to purchase IPv4 addresses on the open market simply to support these corporations. The decision to move to IPv6 is made at the headquarters of these companies - which is often in the United States. The US federal government has recently announced a direction for IPv6-only for the US government. This makes it the right time for this project.
"IIESoc was conceived with the mission to bridge the gaps between the global standards activity and the Indian ecosystem. With this project, we aim to put the deployment of one such standard (IPv6) in the forefront for not just India but the whole Asia-Pacific region," said VinayakHegde, co-founder & President of IIESoc.
"I'm very happy with the grants APNIC is funding this year through ISIF Asia, a display of very important and diverse local Internet initiatives in our region. The IIESoc project addresses a critical issue, which is the uptake of IPv6 by the hugely important 'enterprise' market. These are the companies and organizations that rely on the Internet for their business, and who stand to lose if they do not put IPv6 into their Internet plans," said Paul Wilson, Director General, APNIC.
This initiative has the support of many industry experts. "I congratulate the initiative taken by ISIF Asia to help in IPv6 deployment at enterprises. This is a long-standing problem in the industry. I encourage enterprises to participate in the IETF," said Fred Baker, former IETF Chair and co-chair of the IPv6 Operations group at the IETF.
"These days, technology issues are global. As Chair of the Board of the Industry Network Technology Council, I look forward to a rich cooperation across the globe to tackle IPv6 deployment," said Cathy Aronson.
INTC has done a survey of large enterprises and has found that security, application conversion, and training are three of the biggest challenges enterprises have as far as IPv6 adoption. We need to find out exactly what these challenges entail. To that end, we need to have brick-and-mortar enterprises involved. This is an issue because such enterprises do not participate actively in Internet standards bodies. They do participate to some extent in network operations groups. Outreach to these organizations will be a key part of this project.
The INTC survey matches the APNIC survey which finds that "lack of skills and knowledge (31 per cent) and customer equipment (CPE) that does not support IPv6 (26 per cent) are also barriers to full IPv6 deployment."
"India's Internet story would remain patchy, incomplete and inefficient without accelerated migration and adoption to IPv6 that offers unprecedented address space but also enhances network efficiency and security. It is pertinent to mention that IPv4 and IPv6 can do and shall co-exist thanks to technologies like tunneling notwithstanding that in 2004 itself India had aspired to migrate fully to IPv6 by 2006," said Deepak Maheshwari, co-founder of NIXI, Public Policy Consultant, and Senior Visiting Fellow at ICRIER.
Call to action: Join our IPv6 Deployment project by subscribing to www.iiesoc.in/ipv6.
This story is provided by India PR Distribution. ANI will not be responsible in any way for the content of this article. (ANI/India PR Distribution)