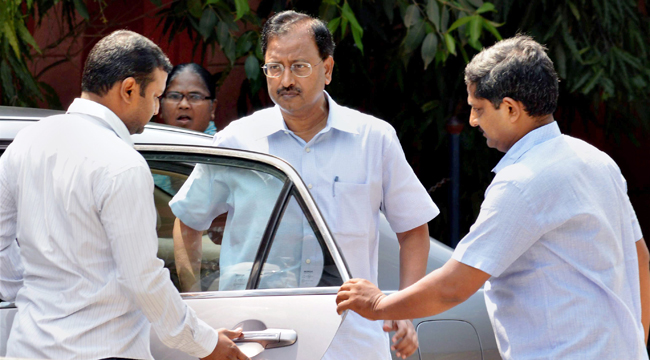 16 April, 2015
Print this article Font size -16+
Corporate leaders and lawyers have termed the Satyam Computer Services fraud case verdict as a "wake-up call" and a big message for India Inc that management boards should take governance very seriously.
A court in Hyderabad on Thursday sentenced former Satyam chief and founder B. Ramalinga Raju and nine others to seven years in prison after finding them guilty in the Rs 7,000-crore accounting fraud that ranks as the country's biggest.
"The big message for India Inc is that the boards should take (corporate) governance very seriously, and to spend more time with the management...I think all of them have to take it as a wake up call, learn from the past mistakes and make sure that this kind of event never occurs in India again," former Infosys CFO V Balakrishnan said.
He further said: "It's a good wake up call not only for boards and auditors but also for regulators because regulation has also failed. We need better regulations in this country."
Chairman of Manipal Global Education, T.V. Mohandas Pai said: "It has taken six years in a dynamic economy, (that) is too much (but) six years is much, much better than what was done earlier. We have come a long long way and this is very good news. Next time we have any such scandal, wish we can prosecute in 2-3 years".
On the quantum of punishment, Pai said, "the punishment should have been stricter."
Uma Maheshwar Rao, a lawyer for Raju, said that the Satyam founder would challenge the verdict in a higher court.
Industry body Assocham, however said the Satyam case is only an aberration because most of India Inc respects corporate governance.
"Though the Satyam-like situation may occur anywhere in the world, the way the company was reviewed authenticates that the Indian system is quite strong to face such challenges," the industry chamber said.
Noted lawyer Harish Salve said the case has taken long as "we do not have the infrastructure in our courts to deal with these kind of cases".
He added: "It has shown that even if it takes time, we are now matured enough to deal with these kind of complex cases of corporate fraud and investigate them thoroughly and arrive at verdict."
Another leading lawyer K.T.S. Tulsi said this is one of the first major crimes in the electronic age and all business houses needed to understand that electronic evidence leaves enough foot print for the investigative agencies to be able to dig up the entire character which is unimpeachable.
Stating that the "landmark judgement" was on the expected lines, former Sebi executive director J.N. Gupta said "it will make sure that in future such things are brought to justice."
Expressing similar sentiments, another ex-Sebi Executive Director PR Ramesh, said while the order is good, but it "came in quite late".
The Hyderabad court also found Raju's brother and ex-Satyam managing director, B. Rama Raju, as well as eight others guilty and sentenced them to seven years in prison, special public prosecutor K. Surender said.
"The judgment given by the court will have far reaching consequences in checking corporate frauds and shall also act as a severe deterrent," said Rajesh Narain Gupta, managing partner at law firm SNG & Partners.
PricewaterhouseCoopers 'Disappointed'
The global auditing firm PricewaterhouseCoopers (PwC) India said two of its former associates, S Gopalakrishnana and Srinivas Talluri, who were sentenced to seven years' rigorous imprisonment in the Satyam case, may challenge the verdict in the higher court.
The firm said in a statement that it was "disappointed" by the verdict.
"We are disappointed with this verdict. As we have said many times, there has never been any evidence presented that either of our former partners S Gopalakrishnan or Srinivas Talluri were involved in or were aware of the management-led fraud at Satyam. We understand that Gopal and Talluri are considering filing an appeal against this verdict," PricewaterhouseCoopers said.
Manoj Fadnis, president of Institute of Chartered Accountants of India, said it had already removed six persons from its Register of Members' besides imposing penalty of Rs 5 lakh on each of them for professional misconduct.
Ramalinga Raju, a management graduate from Ohio University who founded Satyam in 1987, was found guilty of forging documents and falsifying accounts.
Raju admitted in January 2009 in a five-page letter that Satyam's profits had been overstated for years and assets falsified in a fraud allegedly worth over $1.5 billion, bringing the company to the brink of collapse.
Satyam, which in Sanskrit means "truth", was sold the same year to the smaller rival Tech Mahindra Ltd in an auction. The company was later merged with Tech Mahindra, a unit of conglomerate Mahindra & Mahindra Ltd.
The Central Bureau of Investigation's (CBI) Multi-Disciplinary Investigation Team (MDIT) played a crucial role in unraveling the Satyam scam.
"Understanding the system and the fraud was the major challenge we faced during investigation at the beginning. When we got the case in our hands it was over 40-day old. And within 43 days we had to file the charge sheet. And we did. On some days we worked for over 18 to 19 hours a day," V.V. Lakshmi Narayana, who was part of the probe, said.
Tags assigned to this article:
news 3 mahindra and mahindra satyam india inc assocham b ramalinga raju satyam computer services central bureau of investigation pricewaterhousecooper