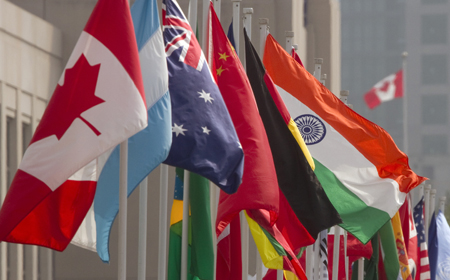 08 November, 2014
Print this article Font size -16+
India, Brazil, China and other emerging nations will pay more to the United Nations after the General Assembly approved a five per cent increase to the world body's budget for 2012-13 to $5.4 billion.
Capping days of intense negotiations, the Assembly adopted a range of Fifth Committee (Administrative and Budgetary) resolutions, covering the scale of assessing Member States' dues, the United Nations pension system and the proposed 2013 budget for 33 political missions.
In a consensus vote, the 193-member world body increased the budget for UN's regular operations by about $243.3 million from the $5.15 billion agreed last December.
The income was revised upwards by $3.99 million to $511.74 million for the current biennium.
The Assembly approved $566.48 million to keep the 33 special political missions running in 2013. These missions include those for Syria, Yemen, Libya and Sudan-South Sudan and large operations in Afghanistan and Iraq.
Emerging nations such as India, China, Russia, Brazil would have to pay an increased share, while contributions of European nations, such as Britain, Germany and France and Japan have been cut in the revised UN budget.
The US' share for the regular budget will remain unchanged at 22 per cent. Each UN member state contributes to the budget based on its share of global gross national income.
India's payments would increase 24 per cent, taking its budget share from 0.5 to 0.66 per cent.
China's UN fees would increase by 61 per cent, taking its share of the budget from 3.2 to 5.1 per cent. This makes China the sixth biggest UN contributor, overtaking Canada and Italy.
Brazil has agreed to an 82 per cent hike in payments, paying 2.9 per cent of the budget instead of 1.6 per cent.
Russia's payments would increase by 52 per cent.