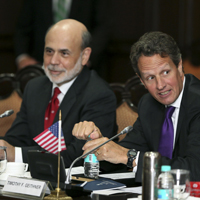 08 November, 2014
Print this article Font size -16+
US Treasury Secretary Timothy Geithner and Fed Reserve Chairman Ben S Bernanke on 10 October discussed global economic situation, monetary policies and some banking issues of mutual interest with RBI Governor D Subbarao and other top officials. Earlier in the day, they also met industry captains and sought to dispel fears that America's bond buying programme (QE3) would push up global food prices. Emerging from a meeting with his counterpart Subbarao, Bernanke, the first US Fed Chairman to visit India, said the the visit was "very constructive".
The second day of their visit to India began with meeting the captains of India Inc over breakfast, which was followed by a luncheon session at the RBI headquarters. "We talked of the global economy, we talked about the monetary policy and regulatory policies. We discussed some banking issues that we have mutual interest in," Bernanke said.
Both Geithner and Bernanke spent a considerable time at the RBI, starting with a closed meeting between Subbarao, and the deputy governor in-charge of the monetary policy Subir Gokarn. "India is clearly becoming a more and more important player on the world stage, in G20 context, in terms of its role in the global economy and I think it's very useful for us to continue to exchange ideas and to build the basis for a future collaboration and coordination," Bernanke said.
A majority of the business leaders mentioned that the recent decision of the Federal Reserve to inject third round of liquidity injection and its implications were discussed. "He (Bernanke) explained what the strategy for QE3 (bond buying programme) is and assured us that implications are not going to be as large as people fear," IDFC Vice-Chairman and Managing Director Rajiv Lall said.
Finance Minister P Chidambaram during interactions with Geithner on 9 October had expressed his concerns over the impact of the QE3 on commodity prices, as that will have a direct bearing on the government's and the RBI's efforts at controlling inflation and boosting growth here. According to Lall, Indian industrialists did not raise the issues of outsourcing and granting visas to Indian IT professionals.
The visiting dignitaries also expressed their appreciation of the recent reform measures by the Manmohan Singh government and the positive impacts they hold for domestic growth, as they did in the first leg of their tour in New Delhi on 9 October. They had met Prime Minister Manmohan Singh and Finance Minister P Chidambaram and top officials in the Capital.
During the day, Geithner also met a select group of young entrepreneurs wherein they discussed how the American businesses can better participate in this market which has enormous potential and also private participation to resolve the country's developmental challenges, a statement from the local US consulate general's office said. Bernanke and Geithner left the city later during the day for Tokyo, where they will be attending the customary annual meetings of the World Bank and IMF.
RBI Governor D Subbarao praised Fed Chairman Ben Bernanke. Through his resort to unconventional policies, Ben Bernanke demonstrated the enormous range, depth and power of the central bank policy arsenal, Subbarao said.
In doing so, he drew not only from his impressive scholarship of the Great Depression, but also from the lessons of several post-war crises, including the long slow down in Japan. This is a rare instance of academic economics being tested in real time, Subbarao said. "All in all, because of what he did, what he said, and above all because he stuck to his convictions honed through deep scholarship, Chairman Bernanke will have a profound and lasting influence on the theory and practice of central banking," Subbarao said in his welcome speech here.
"In the world of policy, he might be remembered for fashioning the monetary policy of the 21st century. In the world of academia, he will probably earn the ultimate honour an academic craves if his real world practice of economics becomes the stuff of text books," he said.
As a central bank, Subbarao said, "we empathise with the Fed's concerns. The crisis has pushed central bank policy making into uncharted territory. We will not know for many years whether the policy mix we have followed to manage the crisis is right."
Even so, in real time, all of us have to struggle with the challenge of managing the new trilemma — of balancing fiscal sustainability, price stability and financial stability, he added. Lauding Bernanke's communication policy, the RBI Governor said the Fed not only explicitly announces the rate, but also gives a clear indication of the future policy trajectory. "Like Chairman Bernanke has carried his policies to an unconventional level, he has carried their communication also to an unconventional level by shaping and managing expectations through post-policy press conferences and town hall meetings," he said.
(PTI)
Tags assigned to this article:
economy india news 3 rbi subir gokarn us d subbarao ben bernanke timothy geithner federal reserve india inc us fed investment banking qe3 deepak parekh quantitative easing 3 rajiv lall chanda kochchar