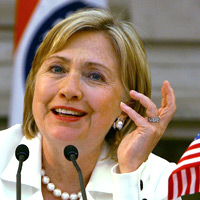 The energy-hungry South Asian nation has publicly rejected Western sanctions but has privately pushed refiners to cut imports of oil from Iran by 15-20 per cent -- enough, it hopes, to win a waiver from Washington during Clinton's two-day visit.

"She might announce a waiver for us ... India has done enough to get that," said an official privy to Indian talks with Iran and the United States.


The United States in March granted exemptions to Japan and 10 European Union nations from its sanctions, which are aimed at pressuring Tehran to end its nuclear programme.


India and China, Iran's biggest buyers of crude, remain on a list at risk if they do not cut oil imports "substantially."


Clinton is currently in China but so far has not publicly commented on its cuts of about a third in imports of Iranian oil in the first quarter of this year.


The US and European Union sanctions have made paying for Iran's oil difficult for India, which is using a Turkish bank currently, and the two sides have set up a rupee mechanism for about 45 per cent of the $11 billion a year oil imports.


India had hoped to boost exports to Iran in order to reduce the trade imbalance between the two but trade discussions in Tehran earlier this year were unproductive.


The rupee mechanism has up to now just been used to clear a backlog of export debts and payments total 3.8 billion Indian rupees ($71.10 million) so far.


On Sunday, a 56-member Iranian delegation led by Yahya Al Eshagh, president of the country's chamber of commerce, arrives for another round of talks over what India can sell to Tehran.

Exporters also want clarity on the latest tightening of US sanctions that target foreigners helping Iran evade sanctions and bar them from access to the US banking system.


"The Indian government should take up the matter with Hillary Clinton ... it is an infringement of the sovereignty of a nation. We are in the rupee system ... we are not in the US banking system," said Shahrukh Khan, a governing body member of the India-Iran Chamber of Commerce and Industry.

An Indian exporter, who did not wish to be identified, said it was not clear whether bilateral India-Iran trade would fall under the new sanctions or not. "We are confused," he said.

Exports of essentials such as food and medicines to Iran are exempted from the United Nations' sanctions which India abides by. The Iranian delegation includes food and pharmaceutical companies but also machinery makers, steel companies and petroleum products manufacturers.

"Indian exports ... should strictly confine to non-UN sanctioned products and categories, as India is committed to UN sanctions," the invitation to the talks said.

Trade between the two is also facing difficulties with the rupee mechanism which uses an account in India's UCO Bank for payments to exporters.


"UCO Bank is acting like a counter. It should get the power to negotiate LCs (letters of credit), advise and pay against the documents if they are in conformity with LCs," Khan said.

In the past, Indian exporters were getting advance payment if documents pertaining to an order were in line with the terms and conditions of LCs.


Advance payments are particularly attractive as the Iranian currency weakens and financing comes under further pressure.

"How can you expect a trade of $4.5 billion magnitude to transact. Only those who want to take a risk and wait for payment for two months are using the rupee account facility," Khan said.