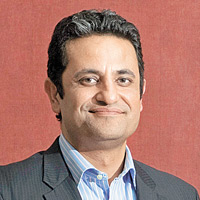 08 November, 2014
Print this article Font size -16+
Oracle is known for its aggressive sales-driven culture. not surpris-ingly, its India head comes from a sales and marketing background. Sandeep Mathur, 44, has worked with Oracle India for nearly a decade; earlier, he was with TCS and IBM. In a chat with BW’s Venkatesha Babu, he outlines Oracle’s vision for the IT market, how it is different from its competitors and the why he thinks Oracle can become the largest IT company in the Indian market. Excerpts:

Oracle for long was the king of the database market. However, over the last few years, through a series of acquisitions in hardware and applications software, you increasingly resemble IBM or HP with a play in software, hardware, applications and services. How is Oracle's vision of IT different from that of IBM?
I don't think the comparison is apt. Yes, IBM competes with us in the database, middleware and the hardware market. However, Oracle has an impressive array of application software both organically built and also inherited from our acquisitions of number of players like Siebel, Peoplesoft etc. IBM does not have much to offer in the applications space.  Also, unlike them we do not do much in system integration and services where we prefer to partner with companies.

For them database, operating system, hardware and middleware are only essential to the extent of helping their main services business, whereas Oracle's vision is to invest in research and development and offer fully integrated engineered solutions.

When Oracle acquired Sun Microsystems in 2007, a lot of eyebrows went up. Hardware is a tough, low margin business, whereas Oracle traditionally has enjoyed very high margins in its software and applications business. Even now some analysts doubt your long term commitment to the hardware business, given that over the last 7-8 quarters this business has been shrinking?

When we acquired Peoplesoft in 2004, there were skeptics worried about what we will do with J D Edwards (an ERP platform which used to do a work mostly on IBM's AS/400 line of servers). Lo and behold, even this year we released a new version of J D Edwards. Oracle is incredibly committed to the (hardware) business. We spent $ 5 billion in R&D last year which is almost the same amount as companies with larger revenues than us such as Microsoft, Dell and IBM spend. We are committed to producing world class products and will invest to innovate whatever it takes. Look at our Exa family of engineered systems where we provide a combination of software, server and storage or the latest T4 Sparc servers we have created. We don't want to play in the commoditised part of the market. With the launch of the new family of products I expect that we will see a dramatic turnaround in our hardware business. In India, for instance, we have picked up an additional 7 per cent market share according to IDC.

Is Oracle late in the cloud market compared to Salesforce or Workday?
Not at all. We wanted to be careful that as market leader, we didn't take the industry 30 years back, where everything was in silos. For example, if for regulatory reasons you had to pull out data from the cloud and convert it into an application and feed it off your data centre, can Salesforce help you do it? No it cannot. Remember the world's biggest banks, telcos, utility companies, insurance companies work on our software. So we had to be careful. We offer our wares both on the cloud and on premise or a hybrid of both. The deployment choice is that of the customer. Recently we announced that we would offer both platform as a service and infrastructure as a service. Saas (software as a service) is just the starting point.

OFSS (formerly iFlex) is not a logical fit into your portfolio. Will you delist and/or sell the company? Also, what are your thoughts on the India slush fund issue for which you were chastised by SEC and the roadmap for Indian operations going forward?
OFSS is an independently listed company, the majority of which is owned by Oracle. I have no comment to offer beyond that apart from saying we are committed to that business.

As far as (slush fund controversy) is concerned, it predates me. Oracle believes in being open, transparent and working in an ethical manner. We are committed to it.

Today one in four of Oracle's global workforce is in India. This is a very important talent market for Oracle. Increasingly we have very good revenues from here. A lot of our global partners like TCS, Wipro and Infosys are based here. They see us as natural allies unlike IBM or HP whose services arms compete with them locally and globally. Both Larry (Ellison, CEO) and Mark (Hurd, President) have pointed out that India is and will grow even bigger for Oracle.
Tags assigned to this article:
it tcs dell infosys microsoft sap ibm hp idc venkatesha babu oracle espn sun microsystems bmc i-flex sheshagiri anegondi venkatesh krishnan sandeep mathur