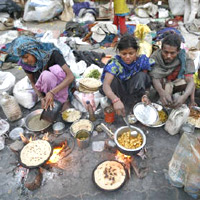 08 November, 2014
Print this article Font size -16+
India has been ranked 66th in the Global Food Security Index, a scoring tool that measures the drivers of food security in 105 countries. It ranks first among the South Asian nations in terms of "food availability", though third in overall ranking due to slightly lesser scores in the "affordability" and "quality and safety" categories.

The index, prepared by the Economist Intelligence Unit on behalf of global agri-science major Dupont, ranks Sri Lanka slightly ahead of India among the South Asian countries.

"The Global Food Security Index should be used as a tool to help stakeholders make informed decisions that drive sustainable results at a local level. Collaboration is the key to unlock the power of science
and we hope the index will foster collaborative solutions that address India's food security needs", Rajeev Vaidya, president, South Asia, Dupont said.

According to the index, India ranks second in food affordability among South Asian countris, owing to a moderate level of food expenditure and a strong presence of government sponsored food programmes. "However, compared with other South Asian countries, India applies high tariffs on agricultural imports, thus impacting both affordability and availability of food", it stated.

In terms of food supply, India averaged 2,352 kcal / person / day as against FAO's minimum recommended intake of 1,780 kcal / person / day. However, 19 per cent of India's population was found to be not receiving required calories, resulting in 224.6 million undernourished people.

On agricultural R&D, India was found to be spending just 1 per cent of agricultural GDP, thereby ranking near the bottom of the 26 lower middle-income countries in the index.