IndiGo To Charge A Premium For Preferential Seats 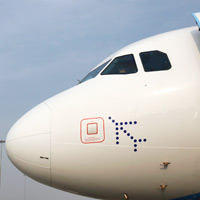 08 November, 2014
Print this article Font size -16+
Pre-booking a seat in the first two rows or near emergency exits in 12 and 13th row in an IndiGo airline flight will cost passengers more with the airline deciding to charge a premium for these seats.

The low cost airline will charge the passenger a premium of Rs 500 for sitting in Rows one, two, 12 and 13 on a domestic flight and Rs 800 for an international flight under its Indigo Seat Plus plan.

Though the airline has not indicated from when it would start charging the new rates, but in a circular to travel agents it said for all other window and aisle seats, which are pre-booked, a passenger would be charged Rs 200 for a domestic and Rs 300 for an international flight.

While pre-booking all other middle seats would cost Rs 100 on a domestic and Rs 200 on an international flights.

IndiGo has followed the footstep of Air India, which on Monday last had announced lowering of the free baggage allowance from 20 to 15 kgs on the domestic sector.

The national carrier had decided to charge a flat rate of about Rs 200-250 per kg on excess weight. The excess baggage charges currently vary between Rs 150-400 per kg depending upon the sector.

The airline is also contemplating levying charges for preferred seats.