Ind vs Aus: Rohit Sharma joins teammates in Melbourne ahead of 3rd Test

Ind vs Aus: Rohit Sharma joins teammates in Melbourne ahead of 3rd Test

Melbourne [Australia], December 30 (ANI): Ahead of the third Test against Australia, India batsman Rohit Sharma on Wednesday joined the teammates in Melbourne after completing his 14-day quarantine in view of COVID-19 outbreak.
The Board of Control for Cricket in India (BCCI) posted a video on Twitter where the opening batsman can be seen meeting his teammates and support staff in the hotel.
"Look who's joined the squad in Melbourne. A warm welcome for @ImRo45 as he joins the team," BCCI captioned the post. 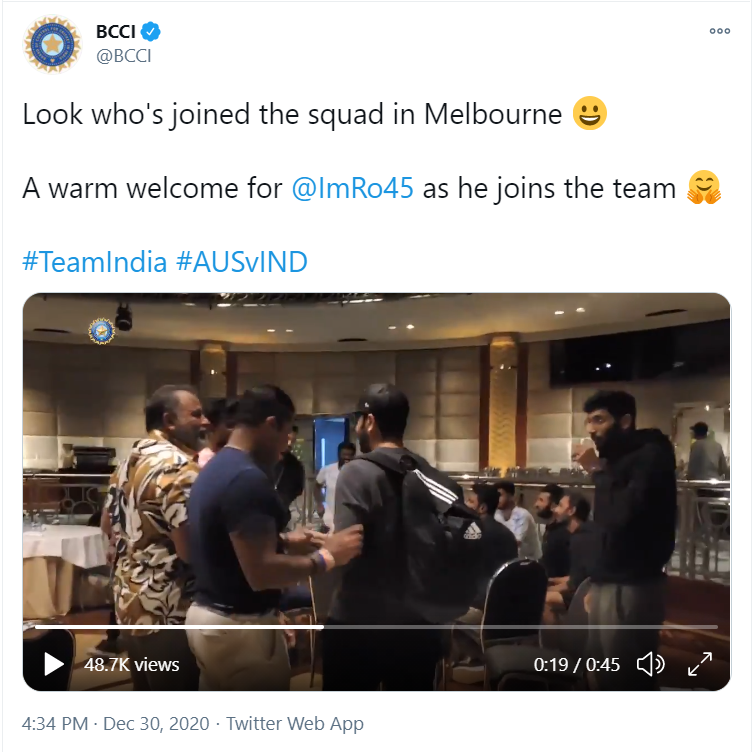 "Rohit Sharma will join the team tomorrow. We will have a chat with him to see where he is placed physically because he has been in quarantine for the last couple of weeks. We will also see how he feels before we take the call," coach Ravi Shastri had said in the post-match press conference on Tuesday.
Earlier, ANI had reported that the Indian opener Rohit will fly from Sydney on Wednesday (December 30) and join the rest of the team in Melbourne as the third Test in the four-match series is all but set to be played at the Melbourne Cricket Ground with an eye on the recent outbreak of coronavirus cases in Sydney. Sources in the know of developments within Cricket Australia (CA) had said the opener will be flown in to Melbourne and will enter Team India's bio-bubble on Wednesday.
Stand-in skipper Ajinkya Rahane had also made his excitement known after the win at MCG.
"We are excited about Rohit coming back. Spoke to him yesterday, he's waiting to join the team," Rahane had said.
India on Tuesday secured an eight-wicket victory over Australia in the Boxing Day Test. Rahane's 12th century in the longest format of the game and Ravindra Jadeja's well-made fifty had given India firm control in the second Test.
It was a Test master-class from Rahane as he played the first two sessions cautiously and then unleashed his true class after the tea on Sunday. If one session had cost India the first Test, it was again a session -- which Rahane and Jadeja weathered on day two -- that saw the visitors bag the second game. After the inspiring show by the batsmen, the Indian bowlers ensured that they kept the foot on the pedal as the hosts managed to score just 200 in the second innings after finishing on 195 in the first.
The third Test between both teams will begin at Sydney Cricket Ground on January 7. (ANI)