In The Realm Of Magic 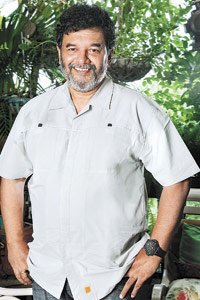 08 November, 2014
Print this article Font size -16+
Recently, there was this incident where Oprah Winfrey felt she had been racially profiled because a salesgirl wouldn’t show her a $38,000 handbag. Racial stereotype apart, why on earth would anyone even consider a bag that’s worth over Rs 25 lakh?

However, that sort of pales into insignificance when the most expensive pair of women’s underwear is going at a cool $15 million. At 66 rupees to a dollar, at least a thousand Indian men can wear new undies to work every day for the rest of their lives with that kind of money.

The point I am making is kind of lateral, but simple. If you apply the prism of vanity to luxury, then the upper end of living is suddenly open to a lot of ridicule from among the have-nots of this Earth.

But then, this article isn’t about that silly prism. In fact, let’s throw it into an emerald-ringed ocean of perfumed blue octane and set fire to it with a diamond-studded lighter from S.T. Dupont.

Having got rid of my offensive middle-class blood and its turmoil, let’s look at the business of advertising that separates money from loaded men and women.

Forgive Me, Did You Not Notice The Mistake?
Neither did I, till the muse of luxury stepped in to whisper. Ouch. I made the cardinal error of dragging something as plebeian as money into the equation.

Luxury, or true luxury, doesn’t have anything do with money. It is beyond physical value. It has its own dimension. It is about transporting men and women of stash to exquisite realms of experience, imagination and pleasure. It has nothing to do with the price tag. That disgusting primal vestige. My very bad.

Advertising in the context of luxury is but a mere channel of information to the wealthy. A mode of interestingly packaged knowledge about a product or service designed to prompt a positive response of warmth from the true haves. It should tickle the soles of those with the means to own them. Period.

More than that, luxury advertising should follow its own heart. When you create your own rules, why follow anyone or anything?

Why Get Pedantic About Luxury Advertising?
You can always dismiss and package luxury advertising into an academic exercise. But I wouldn’t. I would kill myself among the legs of eels and eggs of cows before attempting to pigeonhole the world’s luxury brands into a format of commonly spotted similarities.

I’d think that anyone who tries to define, contain, and pin down the unlimited world of luxury, would be defiling its very spirit. You can’t really click every mood of Africa in a picture, and you can’t actually hold the vastness of the universe in a bottle.

So, What's Luxury Advertising?
Luxury is a state of mind. And, to me, luxury advertising is all about unfettered liberty. Where there ought to be scant regard for the cost of execution. The only criteria should be the capture of an incredible idea. The audacity of the concept. The unabashed lavishness of thought. The opulence of production. Etcetera.

That itself will be the extended aura of the brand that the advertising is trying to represent. Luxury advertising for me is magical. It is almost inexplicable.

And this is something that cuts across geography. The same values work in India, Indiana, and Indonesia — the creation of a magnetic pull that pushes someone to spend a fortune to acquire something that functionally does the same job for a buck or two, and can be bought from a thrift shop.

However, not all luxury brands can actually live in this ephemeral space.

Masses And Classes
To me there’s coach class luxury, and then there’s business class luxury. Maybe I should reword them as mass luxury and niche luxury.

Mass luxury is stuff that you find in magazines. And television. And some deadly looking advertising.

With the amount of retail brand glam shimmering all around, the regular moths in search of mass luxury are being led in by the bright neon lights of our cities’ richie-rich malls.

They flock to these places because, for them, luxury is only luxury when someone recognises the brand that they paid for. It’s an insight that gets a whole new rocket when you look at luxury from the eyes of people who have the money but need the props of those luxe brands to step out from their shadows. This is also the driver and power for mass luxury advertising. One that fuels its own circle of retail therapy.

Make the brand so well recognised that the tasteless insecure rich lot clamour for them to add pride and prejudice.

For the nouveau riche, and the Johnnys come lately, their single most-throbbing desire is to be seen, to be noticed, to be identified as the vectors of luxury brands.

Like giant stickers that scream out their bank balances and their ability and mettle to outspend the Joneses.

And then, there’s the niche luxury buyer. A consumer to whom luxury is more of a quest rather than a typical end of a journey for his or her platinum credit card. When you are really wealthy, when you really have stopped counting money, you lose sight of brands.

Not only do you lose interest in brands, you lose all physical restraints. You are no longer afflicted by branditis.

Half the charm of luxury is in knowing that you have parted with a sizeable chunk of money to acquire it. The challenge makes it worthwhile. It gives you a certain admission of success. But when you elevate to a level where money is no longer to be protected or saved, then life changes you.

People Build Luxury Around You
The other day, I happened to be in the same room as the richest man in the world. And the middle-class advertising bloke that I was and still am, I discreetly searched for telltale logos, names and monograms, anything that I could discover. It would have been good to know what kind of shoes he wore, what suit, what pen, what shirt, what watch, what glasses, etc.

But I couldn’t see a thing. I couldn’t make out a single brand. He was conspicuously shorn of logos. Absolutely antiseptic. He probably didn’t want to lend his name to any brand. Because, at his level, and with his global standing, he is expected to wear the best. More than anything else, he automatically would become an ambassador for any brand. Any thing he eats, drinks, sees, listens, uses, etc. It’s terrible in one way — it’s the price you pay when you are king of the mountain. It’s also incredibly liberating.

Your Wish Is Your Own Command
The interesting thing is that once you have the money, you stretch. Your mind gets to travel in all directions. You think of things that don’t exist. You are no longer held back by the gravity of funds, budgets, accounts and other things that matter to most human beings.

Plus, if you have a creative slant of thinking, and the money to spend, then there’s really nothing that can stop you from pampering yourself. From a humble champagne shower in your bedroom, to 464-day-old lamb shanks exquisitely braised in the sauce of raisins grown in the belly of a secret grotto just where the Equator meets the Amazon closest to the Atlantic. It’s a state of mind where you decide what you want.

Your imagination wants you to have the best in everything. Nothing can be a common version.

Luxury Permeates Everything There’s a luxury version of everything on this planet. From cakes to watches, holidays to homes to wines, shoes to travel and planes. From yachts to caviar, suitcases to extreme adventure, gem-encrusted plates to chocolate truffle chappals, designer birthings to extravagant deaths.

You really think you want to be buried alongside the average millionaire? Damn. What a poor soul. The way to look at this is through the eyes of the opportunity and ideas that life offers both luxury brands and luxury advertising.

After All, Luxury Is Prime Plumage
As the world spins into another age, where the luxury market evolves and grows ever tempting, advertising too will find its way into newer expressions. While mass luxury will continue to regale its Juicy-wearing clientele to take home expensive clothing, cars, holidays, and a hundred more daily medals of opulence, the niche luxury market will continue to become more word of mouth and mysterious.

Imagine this select slice of life from the future world of luxury. I am pretty sure there will be ocean-based clubs that hawk memberships of a billion dollars, private submarines that can run on nuclear power and with self-contained swimming pools, underwater communities that don’t have to depend on land for anything, expansive marine golf courses built on the heaving waters of the oceans, and whole new island countries built on gigantic floating vessels.

Advertising for these won’t be through regular channels. It will find new channels. Like a whole new stream of extreme luxury offers that stream under the morass of the Internet. Accessible only through genetic passkeys.

Who knows what might happen in that nether zone? I am not even sure there will be a market for ultra-end advertising as well. I personally feel that the niche luxury world is going to mutate into an unknown and invisible market. And the advertising world will also play along and rediscover equally compelling expressions. I am pretty sure that we are living in interesting times, and I think awesome times are around the corner. Here’s to restless mankind!