In A State Of High Debt 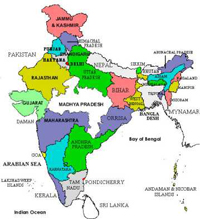 On 8 December, the Reserve Bank of India (RBI) Governor Duvvuri Subbarao said there was no financial crisis in West Bengal. It must have come as a relief to the state's finance minister Asim Dasgupta with whom he met, and assured him the RBI stood ready to support the state as needed.

It was the central bank's intent to quell speculation and doubt about the precarious position of West Bengal's finances. But it will be some time before the RBI governor's vote of confidence — specially targeted at those who expressed doubts about the financial sustainability of that state — begins to take effect.

A first look at the numbers suggests that some of those doubts may actually be merited; many analysts have pointed out that almost 97 per cent of the West Bengal government's receipts went to meet interest payments and salaries. To many, West Bengal is the epitome of a welfare state gone wrong.

Its public debt is unsustainable, the gross fiscal deficit is running at over 6 per cent of gross state domestic product (GSDP), compared to the national average for all states at roughly 3.2 per cent for 2009-10 (FY10). Its tax collections — sales tax, value added tax and state excise duties — are abysmally low. Its debt at Rs 2.06 lakh crore amounts to nearly Rs 21,000 for every man, woman and child in that state, roughly the annual per capita income.

But West Bengal is not the only state with this problem, though it is only one of two states — the other being Sikkim — that does have a fiscal responsibility legislation. Punjab is in a similar mess over its finances. Bihar, despite chief minister Nitish Kumar's development drive, is becoming financially unsustainable. So is Orissa; even the finances of Maharashtra, India's biggest in terms of GSDP, are under stress. How do we explain this sorry state (pun not intended) of affairs?

The Macro View
For one thing, the global credit crisis of 2008 has messed up the finances of almost all states in India. In its annual survey of state budgets for FY10, the RBI said that boosting government expenditure in the face of uncertain growth prospects would also reduce some of the gains that states had made in fiscal efficiency.

For FY09, just four out of 28 states had budgeted a revenue deficit; that number went up to 14 for FY10. Another nine reduced the surpluses they had projected in previous years' budgets. The market borrowings programme expanded substantially, increasing the pressure on debt to GSDP ratios. And overall, gross fiscal deficit targets — even though they have been raised — are unlikely to be met.

Some analysts see these developments as  consequences of the lop-sided structure of the Indian economy. "For a state like Bihar, for instance, agriculture is the mainstay of the economy; increased public expenditure implies an increase in subsidies and payments to farmers, but a lot less for industrialisation," says an economist who wished to remain unidentified.

He may have a point. The RBI's survey on budgets shows that while revenue expenditure may have gone up, capital expenditure outlays have actually been reduced, and are declining. Is there a way out for these states?

The Limits To Growth
While the problem of state finances may be macroeconomic in nature, it is at the microeconomic level that solutions for greater revenues and better financial management may lie. Take West Bengal, a potent cocktail of labour laws, activist trade unions and a government that favours them.

For the fourth largest state with a population of nearly a hundred million, there is precious little industrialisation. Few firms are eager to set up shop there, especially after activism forced the Tata Group to abandon their Nano plant in Singur and move it to Gujarat. Reports have suggested that for every car that would have rolled off the assembly line in Singur, nine jobs would have been created. Think of the revenues in sales and excise that could have made a big difference to state finances.

Like in West Bengal, Orissa faces tremendous challenges to greater industrialisation, even though its political leadership is very keen on it. Again, the same sense of activism prevails there. "The state has land and labour; people are willing to bring in capital for building industries," says Amit Kapoor, director, Institute of Competitiveness at Gurgaon. But, he says, those factors by themselves are not enough.

Case in point: Punjab. The state produces most of India's foodgrains, and its agricultural productivity is very high. Yes, the state has not taken the next step, says Kapoor: it has not created the next link in the value chain, that is, a food processing industry that will create more jobs and generate more tax revenues. The state appears to have reached the limits of its growth.

Going Beyond Hi-tech
The other confusion that often persists is the difference between hi-tech industries and
hi-tech firms. By many yardsticks, Maharashtra is the most industrialised state with firms that range from hi-tech engineering to sugar mills.

The problem with Maharashtra may be that these industries seem to be concentrated in clusters around 8-10 cities, that together account for over 85 per cent of the state's GSDP. Nowadays, the state's infrastructure that produced India's best-known firms is also crumbling; but capital outlays seem frozen.

Many states have toyed with the idea of imitating Karnataka's success with Bangalore, while ignoring inherent characteristics. Bihar has ignored the potential of tourism; with so many East Asian tourists interested in the Buddhist tradition in India, that could be a gold mine (even if it does not replace the mines that went to Jharkhand) in tax revenues for the state. Goa has done well in tourism.

Finally, the problems with many states' finances are thorny issues, but the common theme is better expenditure management. Robert Sarnoff, chairman of the erstwhile RCA and a force in American broadcasting, once said, "Finance is the art of passing money from hand to hand until it disappears."  He could well have been talking about our states' finances.