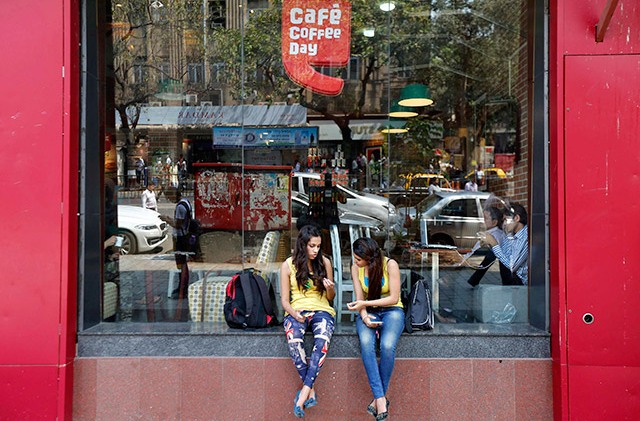 10 March, 2015
Print this article Font size -16+
The firm behind Cafe Coffee Day, India's biggest homegrown coffee chain, is set for a market debut that could value it at almost $1 billion, even as the country's burgeoning cafe culture draws global giants Starbucks and McDonald's.
Cafe Coffee Day, a cafe pioneer in India, aims to list a 20 percent stake, raising roughly $200 million, within the next quarter, sources with direct knowledge of the plans said.
It has hired investment banks Kotak Mahindra Capital and Citigroup among other advisors and plans to file for the listing by the end of April, the sources said.
Cafe Coffee Day, Citi and Kotak did not respond to requests for comment.
India's biggest cafe operator opened its first shop in 1996 and has grown to more than 1,500 outlets as more young, urban consumers opt for cappuccino over tea and seek out spaces to socialise in overcrowded, traffic-congested cities.
The IPO comes as India's sluggish economy is showing signs of life, fuelling hopes of a consumer spending recovery that has boosted shares in food chain operators such as Jubilant Foodworks Ltd, which owns the Domino's Pizza franchise in India.
Jubilant shares are up 20 percent this year and trade at a forward price-to-earnings ratio of 62.5 times, nearly 4 times the average across the Nifty.
India's cafe market is worth 18.2 billion rupees and is growing at 20 percent annually, according to estimates by consultancy Technopak.
"This company would see heavy interest from investors given it's a play on the high potential Indian consumer sector, and due to a revival in the Indian IPO market," said Nirakar Pradhan, chief investment officer at Future Generali India Life Insurance.
Still, the chain faces competition from global rivals that have already edged out some peers. Italy's Lavazza in August announced plans to pull out of the cafe business in India by selling its Barista chain.
Tata Starbucks Ltd, a joint venture between the Seattle-based chain and India's Tata Global Beverages Ltd, has opened 68 shops across India in the past two years.
"Starbucks has been looking at India for 10 years now, but only got in two years ago. They have to make up for lost time," said Harminder Sahni of retail consulting firm Wazir Advisors.
Meanwhile, Hardcastle Restaurants, one of two McDonald's franchises in India, plans to have 50-75 McCafes by the end of the year, up from its current 30.
(Reuters)
Tags assigned to this article:
news 5 ipo starbucks restaurants tata global beverages cafe coffee day jubilant foodworks mcdonald