IPL 6: No Deadline Extension For Meiyappan 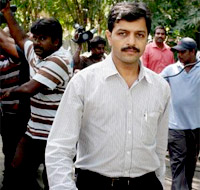 08 November, 2014
Print this article Font size -16+
Mumbai Police on Friday, 24 May, 2013 indicated it would not extend the deadline for Chennai Super Kings CEO Gurunath Meiyappan to appear before it for questioning in the IPL betting scandal, saying "he has been asked to present himself by 5 pm on Friday".

"Meiyappan was served summons on Thursday which asked him to present himself before the crime branch here between 10 AM and 5 PM today. So, he has to present himself by 5 PM on Friday," a deputy commissioner rank officer involved in the probe told PTI.

He, however, parried questions about whether Meiyappan, son-in-law of BCCI president and CSK owner N Srinivasan, would be arrested if he fails to make an appearance today.

Meiyappan had on 23 May sought time till 27 May to appear before the Mumbai crime branch, hours after it issued summons to him for personal appearance.

Though the exact contents of the letter faxed to crime branch was not yet known, the CSK honcho wanted to be given time till Monday as he wanted to attend IPL final in Kolkata on Sunday in which his team would clash with winner of Mumbai Indians and Rajasthan Royals in the last play-off on Friday.

Meiyappan is under the crime branch scanner for his proximity to Bollywood actor Vindoo Randhawa who was arrested for his alleged association with bookmakers.

"Today Arun Jaitley, who is a BCCI vice-President and the Chairman of the Disciplinary Committee and me met Law Minister Mr Kapil Sibal and requested that the strongest possible law should be made to crack down on match-fixing," Shukla told reporters after the meeting.

"We welcome the initiative. The strongest possible punishment should be given. We want a law to be enacted as quickly as possible because in the absence of a law, these people are taking advantage," he said.

"We will soon meet the Sports Minister (Jitendra Singh) because he also wants a strong law. We will request him that a law should be made," he added.

Indian cricket has been thrown into disarray because of the IPL spot-fixing scandal which led to the arrest of three players, including Test pacer S Sreesanth, and several bookies with underworld connections.

The scandal has reached the doorstep of BCCI President N Srinivasan with the Mumbai Police summoning his son-in-law and Chennai Super Kings owner Gurunath Meiyappan for questioning after his name cropped up during the interrogation of betting suspect and Bollywood actor Vindoo Dara Singh.

The Disciplinary Committee will take a final view on it."