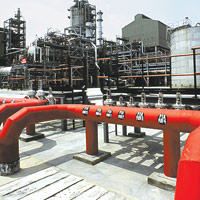 India's largest oil refiner also agreed to an offtake deal for 1.2 million tonnes of LNG each year, or about 10 per cent of the project's annual exports.

The Malaysian state oil firm, which landed on the scene in 2012 with its C$5.2 billion takeover of Canada's Progress Energy Resources, has moved quickly to leapfrog its rivals. It secured an export permit in December and filed its key environmental documents last month.

Petronas to build a 12 million tonne per year terminal near Prince Rupert, along the province's north coast, with first exports in late 2018. The liquefaction and export facilities are expected to cost up to $11 billion.

Petronas has so far signed on three partners, including Japan Petroleum Exploration Co Ltd (Japex) and state-owned PetroleumBRUNEI, and will hold a 77 per cent stake when the IOC deal closes.

IOC and Petronas did not disclose the financial details of their deal, but the Indian cabinet approved the purchase of the stake for C$1 billion in February, a government source told Reuters at the time.

Indian companies, like their Asian peers, have been scouting for oil and gas assets abroad to meet rising domestic demand.

IOC said the super-cooled gas it takes from the Canadian facility each year will meet some of the requirement of its planned 5 million tonne a year Ennore LNG import terminal in Southern India.

Jefferies India Private Ltd acted as sole financial adviser for IOC on the deal, while Stikeman Elliott LLP was its legal adviser.