I Lost My Reputation: Rajat Gupta 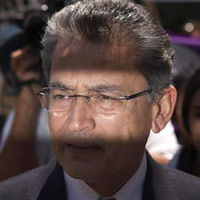 08 November, 2014
Print this article Font size -16+
A devastated India-born former Goldman Sachs director Rajat Gupta, who was sentenced today for insider trading crimes, said he has lost his reputation built over a lifetime and apologised to his family and colleagues. Making his first statement since being charged with insider trading over a year ago, Gupta, 63, read from a prepared statement for six minutes before being sentenced by US District Judge Jed Rakoff to two years in prison on securities fraud and conspiracy in federal court here.

"The last 18 months have been the most challenging period of my life since I lost my parents as a teenager. I have lost my reputation that I have built over a lifetime," Gupta said in a tone that did not betray any emotions.

Standing before the judge for his sentencing, Gupta said, "The overwhelming feelings in my heart are of acceptance of what has happened, of gratitude to my family and friends, and of seeking forgiveness from them all. It is with these feelings that I hope to move forward and dedicate myself to the service of others."

Gupta said his conviction on insider trading charges by a jury in June this year was "devastating" to him as well as to his friends and family and added that the implications of the verdict to all aspects of his life -- personal, professional and financial -- have been "profound."

"Much of the first year seemed surreal to me, however, since the trial, I have come to accept the reality of my life going forward. I want to say here that I regret terribly the impact of this matter on my family, my friends and the institutions that are dear to me," Gupta said.

Gupta has been ordered to pay a $5 million fine and would have to surrender in prison on 8 January next year. He will also have to undergo a year of supervised release after his prison term ends. He had not testified at his trial in June this year and neither had he spoken to the media. Gupta, however, stopped short of taking responsibility for his conviction or admitting his conduct in his statement.

The rise and fall of 63-year-old Gupta, who went from being one of the most successful India-born businessmen in the US to being called "deceptive and dishonest" after his conviction on insider trading charges, has been the stuff of legends. The Diwali of 2011 saw Gupta surrender himself before the FBI after charges of insider trading were filed against him by Manhataan's top federal prosecutor India-born Preet Bharara.

Born in Maniktala in Kolkata, Gupta is the son of a freedom fighter-turned-journalist father and school teacher mother. An orphaned Gupta, who came to Harvard Business School on a scholarship after completing his B-Tech in Mechanical Engineering from IIT Delhi, charted an enviable career graph for himself. Following initial years of struggle after his parents' untimely death, Gupta topped his class at Harvard and applied for a position at McKinsey, but was turned down for lack of business experience.

After a professor personally intervened with the then head of McKinsey, Gupta joined its New York office in 1973. In just over 20 years, he rose to the position of global head of the company, becoming the first ever India-born CEO of a US international corporation.

Gupta's rise through the ranks of Corporate America was stellar with enviable posts like board seats at Goldman Sachs and Procter & Gamble, co-founder of the prestigious Indian School of Business, adviser to the executive leadership of the Bill and Melinda Gates Foundation as also the United Nations dotting his resume. Gupta was also a director of the AMR Corporation, the parent company of American Airlines.