Hyderabad (Telangana) [India], October 15 (ANI): Telangana Municipal Administration and Urban Development Minister Kalvakuntla Taraka Rama Rao (KTR) visited the flood-affected areas in Hyderabad on Wednesday to take stock of the situation and reassure people about the government's help.
KTR reached Greater Hyderabad Municipal Corporation (GHCM) office on Wednesday morning and suggested to officials that the relief efforts should be intensified in coordination with the power companies and other departments. City MLAs, corporators and other dignitaries were all advised to stand by the people on the ground. 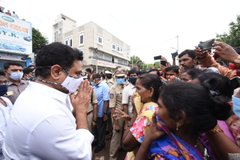 Somesh Kumar, State Chief Secretary along with heads of municipal departments and secretaries of revenue, health and other departments were also present at the teleconference conducted by KTR.
After the meeting, KTR conducted a review meeting with officials of various departments to take stock of the flood situation in the city.
The Minister said that the state government is trying to provide food, blankets, and medical facilities to all those in need of immediate relief, and advised people to stay in the centres set up by the GHMC as heavy rains are likely to continue for another two days.
Later he, along with Hyderabad MP Asaduddin Owaisi and several All India Majlis-e-Ittehadul Muslimeen MLAs visited the flood-affected areas in the old city.
Rao advised GHMC and other engineering department officials to undertake large-scale road repairs after the rains subsided, and expedite the restoration of power supply by immediately talking to the officials of the power companies as the power supply was cut off in many areas due to rainfall. (ANI)