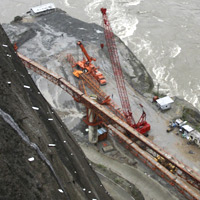 08 November, 2014
Print this article Font size -16+
The Indian power sector is going through a phase of consolidation whereby players with financing capabilities are acquiring projects from groups that have failed to manage their balance sheets.

In this battle of consolidation, the Anil Dhirubhai Ambani controlled R-power managed to outbid other big conglomerates like Adani, Tata and JSW to enter in an exclusive deal with Jaypee Power Venture to acquire three of its operational hydro power plants with 1,791 mw generation capacity at a valuation of Rs 12,000 crore.

According to industry sources, Adani group wanted to buy the same project for about Rs 11,000 crore. At the price of quoted by R-Power, it would not have been financially viable for Adanis to repay the debt and make returns on the project.

For R-power, too, the deal will leverage the balance sheet of the country’s third largest private sector power generator by another Rs 9,000 crore by taking its debt to Rs 36,490 from 27,715 crore, reported in March 2014.

The question here is how will R-Power fund this acquisition given that it has only Rs 3,000 crore worth of cash reserves. The company posted a profit of Rs 1,026 crore for FY14.

According to industry sources, R-Power is already in talks with foreign banks for borrowing money to restructure their debt. In case the company raises money from Chinese banks for a low interest rate loan to fund its acquisitions, it will be the fifth time in three years, that R-Power will be knocking the door of Chinese banks.

In January 2011, the company had taken a loan of $1,114 million from a consortium of Chinese banks to fund its Sasan thermal project. For the same project, the copany had raised funds from US Exim bank as well.

In March 2011, R-COM had raised a debt of $1.93 billion from China Development Bank to fund its 3G spectrum acquisition. According to the group company, Reliance Communications saved more than Rs 500 crore ($111 million) annually by bringing down its cost of debt at 5 per cent.

In January 2012, R-COM once again refinanced its foreign currency convertible bonds worth $1.18 billion dollars by a consortium of Chinese banks for the prominent Indian industrialist.

The company saved an interest payment between 6-8 per cent for a loan of 7 years.

While R-power has faced troubles for being aggressive in the past, as one of its UMPP (Krishnapattam) and a gas-based power plant (Samalkot) could not become operational for lack of fuel, the acquisition of the Jaypee’s already operational hydro project will be a positive for the company.
Tags assigned to this article:
energy and power web exclusives more 4 tata anil ambani gautam adani jaypee group neeraj thakur r-power