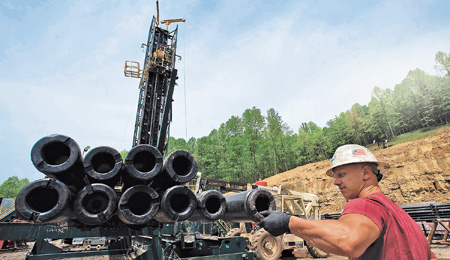 08 November, 2014
Print this article Font size -16+
Shale gas is the new buzzword. India is believed to have enormous amounts of shale gas deposits, according to studies conducted by Oil and Natural Gas Corporation of India (ONGC) in the Damodar (West Bengal) and Cambay (Gujarat) basins. P.K. Bhowmick, head of Dehradun-based Keshava Deva Malaviya Institute of Petroleum Exploration, which provides geo-scientific backup to the exploratory efforts of ONGC, goes as far as predicting that India's shale gas reserves may be higher than its natural gas reserves (40 tcf or trillion cubic feet).

However, no exploration and production (E&P) firm can tap gas from shale, because India is still to formulate its shale gas policy. India has been putting up oil and gas blocks for auction on a competitive basis under Nelp (new exploration and licensing policy), which was formulated in 1999. Nelp only allows exploration of crude oil and natural gas; there is no provision for shale gas whose exploration requires a different technology as well as equipment.

This scenario is set to change by next year, when the oil and gas field regulator, Directorate General of Hydrocarbons (DGH), will auction off shale gas fields. Indications are that there will be an integrated policy, which will allow shale gas companies to explore gas alongside E&P firms in the same blocks that have already been allocated under Nelp. The US, a major shale gas player, follows an integrated policy.

"We are trying to develop the fiscal regime for shale gas," says DGH chief S.K. Srivastava. The current exploration licences allow only one operator to work at one location. Srivastava is working on legislations to allow oil and gas, coal bed methane (CBM) and shale gas operators to work on the same location.

A Question Of Feasibility
The moot question is: even if the policy is in place, will it make shale exploration economically feasible? Experts say the economics of shale exploration might not excite companies right away. While the cost of drilling wells for shale gas is cheaper than that for natural gas or crude, the overall cost turns out to be higher. There are two reasons for this. One, unlike in natural gas exploration, shale gas exploration requires horizontal drilling, which necessitates acquisition of large tracts of land. Two, the shale-fracturing technique is very costly.

Experts say shale gas well would cost $5-7 million, compared to $70-90 million for deepwater drills. This is because the volume of gas per well is lower than that of natural gas.

"The (Indian) cost would be 25-30 per cent more than the US's," says a top official from a technology services company. Moreover, India doesn't have good pipeline infrastructure. "In India, it would be difficult to produce gas at present APM (administered pricing mechanism) of $4.2 per mmbtu (million metric British thermal units)," says an industry source. While the exact costing is yet to be worked out, experts say it would be in the region of $7-8 per mmbtu. So, unless the price of gas reaches $8-9 per mmbtu, it would be unviable to trade shale gas.

The buzz has gone around. More than a dozen firms have sought details of the ONGC-Schlumberger findings. Interestingly, it is not just E&P companies that are interested. "There are queries from non-E&P companies... varying from large infrastructure firms to those who consume gas as a fuel," says an industry source.  Global players such as Oilex, BP, ExxonMobil, Shell, and Joshi Technologies, and Indian players such as Reliance Industries (RIL) and Essar are among the interested.

RIL seems to be the most aggressive. It has already invested about $3.5 billion in three shale gas companies in the US. Insiders say RIL's aim is to gain the technical know-how of shale exploration and jump on to the Indian scene the moment it is allowed. The US experience will also come in handy for RIL to qualify for an exploration licence in India.

Game Changer?
In the US, the leading producer of shale gas in the world, shale gas played a role in reducing dependence on other countries for gas and, thus, reducing the price of gas. As much as 17 per cent of natural gas produced in the US comes from shale gas reserves. At present, the US is trading gas at $3.8-3.9 per mmbtu, while the production costs are $4-8 per mmbtu. Selling gas at this price isn't hurt the US E&P firms as most supply contracts in the US were signed when the gas price had touched the $8-9 per mmbtu mark in 2005-06. Shale gas production reaches its peak and stays there for the initial 12-15 months; and the shale well returns the investment within this period.

Can India follow on the footsteps of the US and make a success story out of shale? ONGC officials are optimistic. But experts say that the Indian shales are complex and lie buried much deeper than the US ones.

Trouble Spots
Notably, major shale deposits in India happen to be in sensitive areas. In fact, Damodar basin is a Naxal hotbed. So, land acquisition in such places would be a headache for the government as well as the E&P company.

Also, the fact that shale gas is not so clean a technology and that it needs large tracts of land, are likely to invite trouble. "Land acquisition would be a challenge," concedes an official at the Ministry of Petroleum and Natural Gas. The government will find itself in a quandary if environmentalists take up the issue.


Environmentalists claim when shale rock is broken, the crust on which it rests moves and the cascading effect will result in mini earthquakes. Besides, the chemical-laced water used for fracturing can mix with groundwater and contaminate it. However, officials at a leading technology servicing company play down the danger. There is very limited risk of breaching the groundwater. The water table is generally at 100 metres, and shale would be at a minimum of 1,000 metres.

The government needs to do three things: formulate a pragmatic land acquisition policy, articulate the economic feasibility of shale gas exploration, and assuage the environmental and ecological repercussions. Or else, shale gas reserves may remain underperforming assets.