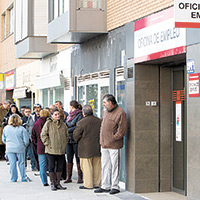 08 November, 2014
Print this article Font size -16+
The number of people out of a job in the euro zone has fallen for the first time since April 2011, the latest sign that the bloc may make a muted recovery from recession later this year. Falling spending in June by shoppers in Germany, France and Spain, however, will dampen any early celebrations, but low annual inflation — stable at 1.6 per cent in July — means the European Central Bank is able to act if the recovery falters. In June, more than 19 million people were unemployed, 24,000 fewer compared with May, European Union statistics agency Eurostat said. Predictions of a rebound have so far proved illusory as Europe tries to overcome more than three years of crisis. Indeed, the fall in euro zone joblessness was not enough to bring down the overall unemployment reading for the bloc, which remained at a record 12.1 per cent for the fourth straight month.

Joining Forces
France’s Schneider Electric is to buy British engineering firm Invensys for £3.4 billion to strengthen its high-margin industrial automation business and win more custom in the fast-growing energy sector. The deal, Schneider’s biggest since its $6.1 billion purchase of American Power Conversion Corp in 2006, will combine Invensys’s automation software that helps run power stations, oil refineries and chemical plants with Schneider’s automation products for the car, aerospace, food and beverage industries. It will bolster the French group against larger players such as Switzerland’s ABB and Germany’s Siemens and give it the opportunity to cross-sell its energy-efficiency products to Invensys’s high energy-using customers.

Rescue Act
PSA Peugeot Citroen won EU approval for a €7 billion state-backed debt rescue, keeping the French automaker afloat as it struggles to rein in losses. The European Commission said it had approved the financing aid, granted last year, on condition that Peugeot keeps debt in check and pays a higher rate as its financing business improves. “This is a balanced result which offers the PSA group the chance to make a new start on a sound basis,” EU Competition Commissioner Joaquin Almunia said. Peugeot, the carmaker worst hit by Europe’s five-year auto market slump, made a loss of €5 billion last year and is still burning through more than €100 million each month. The Paris-based company was forced to negotiate the three-year state guarantee for its car loans arm, Banque PSA Finance, after a series of credit downgrades swelled borrowing costs.

Shock Absorber
Barclays is raising £5.8 billion from its shareholders to help plug a larger-than-expected capital shortfall identified by Britain’s financial regulator at the bank. The Bank of England’s Prudential Regulation Authority (PRA) said Barclays needed an extra £12.8 billion to strengthen its capital reserves against potential market shocks. That was higher than an estimate of about £7 billion a month ago, mainly due to tougher European rules on the way banks measure risks. The PRA gave the 320-year-old bank a year to fill the gap, requiring it to turn to shareholders to speed up its plan to rebuild capital.

Green Stand
France took formal steps to outlaw the sales of several Mercedes models, upping the stakes in a stand-off over parent company Daimler’s use of an air-conditioning coolant banned by the EU. Registrations on the Mercedes A- and B-Class, and CLA “will remain forbidden in France as long as the company does not conform to European regulations”, the environment ministry said, after the German luxury carmaker contested the move in court.

Tough Call
Miner BHP Billiton is weighing in on the fate of a $14-billion Canadian potash project just as the collapse of a dominant potash cartel puts more pressure on already weak prices. The Jansen project in Canada’s Saskatchewan province was a tough call for BHP CEO Andrew Mackenzie, with mining investors reluctant to spend on big-ticket projects and most also cool on an oversupplied potash market. But Russian potash giant Uralkali’s decision to break out of its venture with Belaruskali, a move that could slash the nutrient’s prices by 25 per cent, could leave Mackenzie with an even tougher choice — that of cancelling it.

Upward Swing
US economic growth unexpectedly accelerated in the second quarter, laying a firmer foundation for the rest of the year that could bring the Federal Reserve a step closer to cutting back its monetary stimulus. Gross domestic product grew at a 1.7 per cent annual rate, the Commerce Department said, stepping up from the first quarter’s downwardly revised 1.1 per cent expansion pace. The economic picture was further brightened by the ADP National Employment Report, which showed private employers added 200,000 jobs in July, maintaining June’s pace.

All In A Name
Microsoft is changing the name of Skydrive, its cloud storage service, after a legal challenge by broadcaster BSkyB. A US high court ruled that the name infringed its trademark. The judge had said there was evidence Skydrive’s name had caused confusion among customers having problems with Microsoft’s product, who would end up calling the BSkyB helpline in the mistaken belief that it was responsible for the service. This is the second time in recent months that BSkyB has successfully defended its trademark against a tech company.

Time-Bound
Two former Apple employees have accused the iPhone maker in a lawsuit of subjecting hourly store workers to daily searches while they were off-the-clock, arguing they should be compensated. The ‘screenings’ or bag searches, designed to discourage theft, are conducted every time sales reps leave the store, including for meal breaks, the plaintiffs alleged in a lawsuit. They are seeking unpaid wages, overtime compensation and other penalties.

Trade Spat
China and the European Union (EU) defused their biggest trade dispute by far with a deal to regulate Chinese solar panel imports and avoid a wider war over goods from wine to steel. After six weeks of talks, EU’s trade chief and his Chinese counterpart sealed the deal, setting a minimum price for panels from China that are near spot market prices. EU solar panel makers accuse China of benefitting from huge state subsidies, allowing them to dump about €21 billion worth of below-cost panels in Europe last year, putting European firms out of business. EU had planned to impose hefty tariffs, but will no longer do so.

Past To Present Tense
Japanese firms can’t seem to put the past behind them. A South Korean court ordered Japan’s Mitsubishi Heavy Industries to pay a total of 400 million Korean won ($360,200) in compensation to five South Koreans (all deceased) for forced labour during Japan’s colonial rule till 1945. Mitsubishi said it would appeal the decision. The Busan High Court’s decision followed a separate ruling ordering Nippon Steel and Sumitomo Metal Corp to pay compensation to four South Koreans for forced labour during the 35-year colonial rule. The Seoul High Court ruled against Nippon Steel and Sumitomo, ordering them to pay 100 million won to each of the four plaintiffs. Nippon Steel has also said it will appeal.