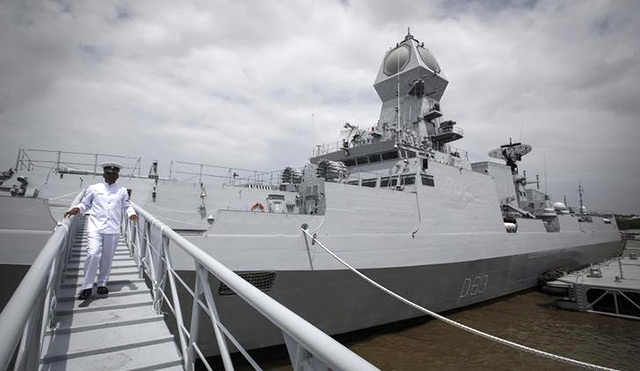 08 April, 2015
Print this article Font size -16+
Global conglomerate Hinduja Group is making a foray into the defence sector in a "big way" and may soon add it as their 11th autonomous business to "strengthen India's self-security".
The London-based Hinduja group has the ability to manufacture parts that might be needed in the field of defence equipment, NRI industrialist and Co-Chairman Gopi Hinduja said.
"We are expanding in a big way in the defence sector because within the group we have the capabilities and facilities for the 'Make in India' concept," he said, referring to the slogan coined by Indian Prime Minister Narendra Modi to manufacture as much as possible in India.
The company may soon add an 11th "vertical" - defence - to the 10 they already have, namely autonomous businesses in the areas of health, energy, power generation, automotive, finance and banking, oil and gas, IT and BPO, media and cable, real estate and trading.
He said at the moment the group has three companies dealing with defence, but the objective is to centralise manufacturing into one vertical.
"Defence does not mean I am going to build aeroplanes or submarines. I am going to provide them (the makers) the facilities that I have, manufacturing parts, designing engineering, local knowledge, expertise. Whatever facilities we have within our companies to whoever is coming to India and wants to do defence business and make something in India," Gopi said.
"After all, the country needs self-security. Today, India is suffering in a big way because it needs to do much more to protect itself."
India has announced a 7.9 per cent increase in defence spending for the fiscal year starting April 1, suggesting that it will move only gradually with the military's long wish list for fighter jets, ships and artillery.
After years of neglect, India is trying to narrow the military gap with China, which has been building up its fleet of ships and submarines making forays in the Indian Ocean.
India's defence spending will rise to 2.47 trillion Indian rupees ($40.07 billion) for the current fiscal 2015-16. The allocation was 2.29 trillion rupees in 2014-15.
The self-help philosophy that Modi has espoused is one with which the Hindujas agree.
Gopi said that Modi has "clear cut objectives".
"There was a time when India was going to the world for showcasing that India is a good investment destination. Today, the world is coming towards India. If Modi is able to implement 30 per cent of what he is promising, that will be a great success. His problem is tackling the system and culture of so many years - to convert that with the bureaucracy he has inherited takes time," Gopi said.
"But Mr Modi and his senior cabinet ministers are headed in the right direction. I am confident they will be successful in changing the face of India and that is why we are taking more and more interest in India. We have even enhanced our exposure to India by further 10 per cent," he said.
In India, the Hindujas have stirred interest by declaring that the group is prepared to invest $10 billion in 'Brownfield or distressed projects', for example in the renewable and infrastructure sectors, according to information given in the Asian Rich List 2015 that has the Hinduja brothers on the top.
Gopi also said that the company has identified four projects in power, two in infrastructure, two in engineering, procurement and construction, and three or four in the defence sector.
(Agencies)
Tags assigned to this article:
news 7 narendra modi defence hinduja group hinduja make in india gopi hinduja