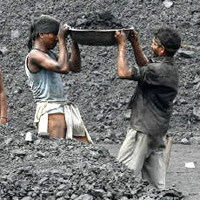 08 November, 2014
Print this article Font size -16+
Shares in Hindalco Industries gain as much as 3 per cent after Prime Minister Manmohan Singh's office says he is satisfied with the outcome of the process of allocating coal blocks to certain companies, dealers say.

The comments were the first attributed to Singh since a case was filed this week against three companies in a scandal, dubbed "Coalgate." The scandal surfaced after an auditor's report last year questioning the government's practice of awarding coal mining concessions to companies without competitive bidding.