High On Target, Low On Hope 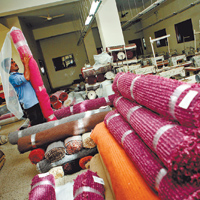 India will need to look for growth in the emerging economies of Africa, Latin America, Oceania and East Europe, to reverse the downward trend in exports. Unveiling the five-year policy on Thursday, Commerce Minister Anand Sharma set an export target of $200 billion for the next fiscal that would double India's share in global trade to 3.3 per cent by 2020.

"The immediate priority of the policy is to arrest the declining trend of exports," said Sharma at a news conference in New Delhi. "In this economic climate, the developed countries have shown a negative growth trend and, therefore, we have taken a conscious view to expand and diversify our export markets, especially in the emerging markets of Africa, Latin America, Oceania and CIS countries." India's exports, which stood at $168.7 billion for the year ended March 2009, have been falling in annual terms since October as the global credit squeeze followed by recession in developed nations, dipped demand.

Twenty-six new markets — 16 countries in Latin America and 10 in Asia-Oceania — have been added under the Focus Market Scheme, launched in April 2006. The incentive available under the scheme has also been increased from 2.5 per cent to 3 per cent — exporters can now claim duty credit scrip equivalent to 3 per cent. Similarly, the scope of the Market Linked Focus Product Scheme, introduced last year, was increased to include a number of new products from synthetic textile fabrics, to pharmaceuticals and glass products, and 13 new markets in Africa, Latin America and Oceania.

A new scheme, Export Promotion Capital Goods (EPCG) at zero duty, will be introduced to encourage technological upgradation and improve exports competitiveness. A tax refund scheme (Duty Entitlement Passbook) will be extended to December 2010 while other tax incentives for exporters will be stretched to the end of 2010-11. Finally, the government will ensure the availability of dollar finance and simplify procedures for exporters.

"In the remaining three years of this foreign trade policy up to 2014, the country should be able to come back on the high export growth path of around 25 per cent per annum," Sharma said, adding that the focus would be on export sectors with high employment.

"The continued thrust on procedural simplification for exports will reduce transaction costs for Indian exporters and would go a long way in enhancing the competitiveness of Indian exporters, especially the small and medium-sized exporters," says Chandrajeet Banerjee, CII's director general.

Mukesh Kalram, joint secretary for international trade at the Federation of Indian Micro and Small and Medium Enterprises, disagrees. "The policy offers neither any contra-cyclical measures for reversing the current trends nor any strategic vision for the future," he says. "Even if micro and small and medium enterprises contribute to more than 35 per cent to direct exports, and they have been hurt the most, there is no innovative proposition as how to help them find new markets. The policy only proposes to spend more resources through MDA (market development assistance) and MAI (market access initiative). Not a word for any change in delivery mechanism or new public private partnerships models to improve efficacy and efficiency of the current schemes."

However, the foreign trade policy could be revised. As Sharma put it: "Given the current economic climate, policy measures being outlined by me are for a two-year period, and thereafter we shall take stock for making mid-course corrections."