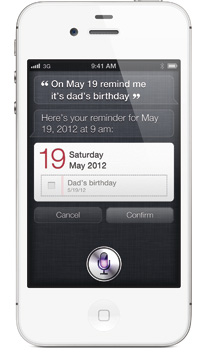 That said, for a software which Apple clearly states is in beta, it worked pretty well out of the box, but are the pumped up internals and Siri enough to justify the asking price in India? You could try asking Siri this, but I suspect she may be a tad biased!

Apps For X-Mas
If some of you are lucky enough to find an Apple or Android phone in your Christmas stockings, here are some apps that will make your Christmas experience complete. Android users can look at Christmas Ringtones and Christmas Tree Live Wallpaper to spruce up their phones with the yuletide spirit. iPhone users can head over to the App Store and see the special Christmas section which includes gems such as Christmas Songs, music and carols, an app that plays back over 50 holiday classics, or the Create Greeting Cards app for sending greetings to near and dear ones. What's more, look out for great deals on a wide range of apps – some going for free while others deeply discounted. It is the season of giving, after all…

Smooth Operation
Portable apps aren't exactly new, but Kingston's urDrive range of flash drives package a bundle of software that lets users install and run programs off of the USB drive so they can use, for example, their own photo viewer and MP3 player on any PC without leaving a footprint behind. Particularly useful for folks who have to use public computers or for those who can't install their own software in their work PCs. Best of all, the built-in browser has anti-key logging software and stores all cookies and passwords on the drive, which makes public use that much more secure.