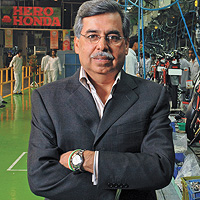 Some analysts feel Honda would have agreed to the discount only after getting Hero to hike the royalty payments for the use of the Honda brand name and technology. Hero officials have, however, denied this. "In fact, there will be no royalty on the existing products after June 2014," says Ravi Sud, CFO of Hero Honda Motors.

But there is an alternative view that suggests that the price is not too skewed in Hero's favour. For one, perhaps Honda itself was keen to get out to focus on its Honda Motorcycle and Scooter India — the agreement would have ended in 2014 anyway. Besides, Honda could have felt that the price of the Hero Honda scrip also reflected the Honda technology. Because Honda will not supply technology to Hero beyond 2014, that needed to be factored in. And don't forget Hero will now have to spend a huge amount on rebranding, too.