Here’s A Recap For You 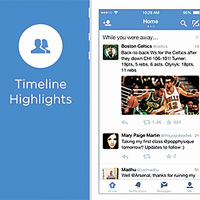 22 January, 2015
Print this article Font size -16+
Microblogging site Twitter has rolled out its ‘While you were away’ feature, which shows the ‘best tweets’ that the user may have missed since his last visit. It appears at the top of the timeline and is Twitter’s first non-chronological feature.
The company had said in a blog post as far back as October: “There are times when you might miss out on tweets we think you would enjoy. To help you keep up with what’s happening, we are testing ways to include these tweets in your timeline.”
The new feature is very similar to Facebook’s News Feed, as it collates the most interesting content to make it stand out in the Timeline, unlike the earlier version of the Timeline which only allowed the most recent content to appear on it.
The blog post had gone on to say “we are exploring ways to surface relevant tweets so the content that is interesting to you is easy to discover, while still preserving the real-time nature of the platform that makes Twitter special”.
It will be interesting to see how this feature can work in favour of brands as it means getting more attention for tweets if they are interesting and engaging. Brands can use this feature to drive more engagement from users as this will make sure that users get to see the most interesting tweets from the brands they follow even when they were not logged in at the time of the tweet.
Another feature that Twitter is looking to roll out soon is the instant timeline feature for new users who don’t want to spend time cultivating one on their own.

Credit Policy
LinkedIn has announced changes to its InMail policy. Starting 1 January 2015, it will return InMail credits for every response that a mail gets, rather than for no response. LinkedIn’s InMail is used by brands to send out personalised emails, messages to customers and by companies to recruit talent. Chia-Peck Wong, senior manager, Corporate Communications, LinkedIn, explains, “The change in policy is aimed at helping increase response rates by encouraging companies to send more personalised InMails.”
WhatsApp  Rush
A Facebook post has reported that WhatsApp notched up a staggering 700 million active monthly users, with over 30 billion messages being sent every day. WhatsApp has 11 million active users in Africa alone, compared to BBM’s total  of 91 million active users. WeChat, with 468 million monthly active users, is not far behind Milestones. Google Drive and Google Play Games have reached the 500 million Android install barrier, while Google+ has entered the 1 billion install mark. As for social media apps, Twitter and Instagram beat Facebook and Google+ with 100 million-500 million installs.
(This story was published in BW | Businessworld Issue Dated 09-02-2015)
Tags assigned to this article:
magazine social media facebook twitter linkedin whatsapp magazine 09 february 2015