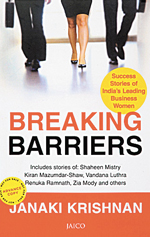 08 November, 2014
Print this article Font size -16+
When Kiran Mazumdar-Shaw was told by Vittal Mallya that she could not be given a job at his United Breweries as she was a woman (her male colleagues would not accept her) even though she was qualified, young Kiran was hurt. “That’s when the hard fact hit me. There is a gender bias....” Of course, Mallya’s loss was biotechnology’s gain. Mazumdar-Shaw went on to found India’s first biotech firm Biocon, which is worth over Rs 2,000 crore now, and growing.

Breaking Barriers, a compilation of 11 success stories about women by business journalist Janaki Krishnan, makes for delightful reading. These are stories of women who have fought the odds — sometimes not only that of gender prejudice, family pressures and stereotypes, but also of more ubiquitous ones like  economy and social strata — to emerge winners, each in their unique way. The impressive lineup includes activist and educator Shaheen Mistry, beauty entrepreneur Vandana Luthra and corporate lawyer Zia Mody, among others.

It is not that we have not read inspiring stories before. It is also not that we have not read about most of these women. But what makes Krishnan’s 200-odd page tome worth reading is the honesty and straightforwardness with which the lives of each of these real women unfold across the pages. They have managed to not only balance pressures from their families to get slotted into the daughter, wife and mother triangle, but also own their space in the boardroom.

What is most interesting about these women is their resolve and determination to do something extraordinary. Their questions and moments of self-doubt are acutely relatable. For instance, Mistry, founder of the nonprofit Akansha and the Teach for India movement, went from asking a question we all may have asked at some point — “What do I want to do?” — to teaching children in Mumbai’s slums, and now asking, “Where am I needed the most?” and “Where can I create the maximum change?”

Or, take the example of Ishita Swarup, the founder and CEO of 99labels.com, who went through a series of jobs before she could open the discounted brands portal. VLCC founder Luthra, too, had to “learn” to manage the house — ‘cook, sweep, mop’ after she got married —before she started managing modern India’s beauty industry.

And all through the retelling, Krishnan’s style is simple and journalistic. There are no superfluous words or blown up emotions in an attempt to make her protagonists seem larger than life. And that is her speciality. The stories ring true, because they’ve been told with the kind of matter-of-fact attitude that life usually presents itself.

Albeit, the publishers could have beefed up the presentation a little. The passport-sized, barely visible black-and-white photographs of these game-changers at the beginning of the profiles hardly lend credit to the interesting and colourful stories that follow. That said, all in all, the book makes for a pleasant read, probably over a short flight or as a gift for the Genext.